Does Canada’s federal government want to destroy us? 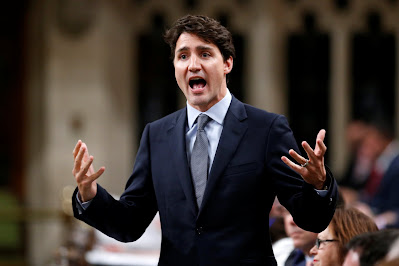 Does Canada’s federal government want to destroy us?

Canadians should think about this question.

Yes, I confess, the question (and title) serves as click-bait. But I do believe it’s a reasonable question to ask. I have four reasons.

1. As is well known, COVID lockdowns destroy livelihoods and lives. Witness the toll on small businesses. Witness the loss of education that jeopardizes young Canadians’ present as well as future well-being. Witness the general social isolation, resulting in more and more cases of depression, drug abuse, and suicide.

Sure, the government has been promoting vaccines, though mass vaccine mandates are not, in my view, the way to go. I think vaccines are wise, depending on, in discussions with one’s personal physician, whether one has a high-risk profile for COVID or not. I think too, however, that one-size-fits-all vaccine mandates are morally wrong and a violation of charter rights (they violate bodily autonomy and informed consent and smack of government overreach and coercion; for more on my view see here and here).

Vaccine mandates aside, our federal government has been constantly failing in its leadership. How? By, at the get-go, not requiring—and not funding—a nation-wide mega-increase to the low capacity of Canada’s healthcare system so it can handle the COVID pandemic.

In fact, Canada’s healthcare system has pretty much remained static.

In fact, too, instead of increasing healthcare capacity, the federal government has been wasting taxpayers’ dollars (for more on the government’s frivolous spending, see here and here). And, to keep the festering wound from healing, the government has imposed (stupidly) vaccine mandates on much-needed healthcare workers—many of whom have been laid off.

Moreover, our healthcare system’s ongoing lack of capacity serves as an ongoing trigger for more lockdowns. And so the cycle continues, as more livelihoods and lives are destroyed.

2. As the sometimes deadly, deep freeze of Canadian winter bears down on us, our federal government is unleashing inflation—inflation on the fuel we need to stay warm and on the food we need to eat. For Canadians (many Canadians) living on fixed incomes, and for Canadians (most Canadians) whose incomes don’t rise at the same rate as inflation, this may be disastrous.

And, as if to throw ice onto someone suffering from hypothermia, our federal government is cutting supply lines—life lines—by enforcing a vaccine mandate on cross-border truckers. As Canadian Conservative finance critic Pierre Poilievre correctly observes, this will leave grocery stores with empty shelves. According to Toronto Sun columnist and True North contributor Anthony Furey, it may also cause shortages in medical supplies.

It gets worse. In the cold darkness lurks a deeper darkness.

3. There is an issue that has taken a backseat in the mainstream news about COVID, but needs to be brought to the forefront of our thinking. That neglected issue is MAiD (medical assistance in dying, which is a euphemism for physicians killing patients).

Our federal government supports the “choice” for MAiD and, in recent years, has been making MAiD more accessible to more and more people by loosening restrictions (so it’s not just for the terminally ill). But, and this is hugely significant, the federal government supports the “choice” for medically-assisted suicide before ensuring that Canadians actually have real options.

Think of the MAiD matter this way: Our federal government sets up conditions so citizens can more readily “choose” to die and, at the same time, by its dismal COVID healthcare response, also creates conditions to encourage that “choice” (conditions such as loss of livelihoods, depression, etc. coupled with lack of palliative care). Clearly, our federal government thinks that in Canada there are some lives not worthy of living.

This is deeply dark, especially if we think about history.

Consider the following passage from Dr. Leo Alexander (1905-1985), medical advisor to the U.S. Chief of Counsel at the Nuremberg Trials, trials in which Nazis were convicted of crimes against humanity (this passage is from Alexander's paper “Medical Science Under Dictatorship,” The New England Journal of Medicine, 241:2, July 14, 1949):

“Whatever proportions these crimes finally assumed, it became evident to all who investigated them that they had started from small beginnings. The beginnings at first were merely a subtle shift in emphasis in the basic attitude of the physicians. It started with the acceptance of the attitude, basic in the euthanasia movement, that there is such a thing as life not worthy to be lived.”

Dr. Alexander continues: “This attitude in its early stages concerned itself merely with the severely and chronically sick. Gradually the sphere of those to be included in the category was enlarged to encompass the socially unproductive, the ideologically unwanted, the racially unwanted, and finally all non-Germans. But it is important to realize that the infinitely small wedged-in lever from which this entire trend of mind received its impetus was the attitude toward the nonrehabilitatable sick.”

Canada has gone beyond the nonrehabilitatable sick.

I don't believe that there is a Nazi Party on Canada's horizon (thank goodness). But I do believe that some of the deep philosophical principles of what Pope John Paul II (1920-2005) called the Culture of Death are becoming prevalent in our society.

So, again, I ask: Does Canada’s federal government want to destroy Canadians?

Now it gets even darker—and sinister.

4. I’d like to think that any possible destruction of Canada’s citizenry by its federal government isn’t deliberate. A more charitable interpretation is that it’s probably merely the result of stupidity. Remember Prime Minister Trudeau saying that he doesn’t think about monetary policy? Or that the budget will balance itself? Those are in fact stupid things for a prime minister to say, and especially so in view of Canada’s out-of-control debt and increasing inflation. (I’m not insulting the PM here. I’m merely observing some facts.)

Policies have consequences, in other words. And stupid policies can be disastrous. But, as the PM’s response to the COVID pandemic suggests to me, I’m not so sure it’s just stupidity. Bear with me as I explain.

Notice that, historically, disastrous stupidity has also been intertwined with an ideology of hate.

Significantly, Hitler’s and Stalin’s and Mao’s policies began with various people groups being “othered.” To “other” someone or some group of people is to diminish their dignity and humanity by attributing negative characteristics to them and thereby push them out of the social in-group because, well, they’re not “one of us,” not one of the enlightened, not a comrade, not to be tolerated.

It turns out that Prime Minister Trudeau has “othered” unvaccinated Canadians by insulting them publicly, saying “they are extremists who don’t believe in science, they’re often misogynists, also often racists” (when this is in fact false). The PM has also encouraged Canadians not to tolerate them.

This is serious. Really serious. And terribly, terribly dark.

Indeed, instead of wisely leading Canadians away from divisiveness—what a good leader should do—Prime Minister Trudeau is fanning its flames. He is, in fact, fomenting division and hatred.

This is alarming because, according to a poll reported by the National Post, “Many Canadians are in favour of harsh punishments for the unvaccinated, with 37 per cent saying in a new poll it would be acceptable to deny them publicly-funded health care—and 27 per cent that it would be OK to go as far as a short jail sentence.”

So not only has the “othering” begun, but also it’s being led by—and exacerbated by—Prime Minister Justin Trudeau.

But where will it end?

Canada’s Prime Minister praised Castro by saying Castro was a “remarkable” person who “served” and “had tremendous dedication and love for” the Cuban people.

But such praise makes sense only if “serve” and “dedication” and “love” do not preclude murdering thousands of political dissenters by firing squad, putting additional thousands of dissenters into inhumane prison cells, forcing thousands upon thousands of men, women, and children to flee in rickety boats in shark-infested waters while soldiers shoot at them, and then impoverishing the millions who didn't escape.

These were people Castro “othered.”

Canadians should wonder if the stupid policies of Canada’s federal government might also end up being murderous.