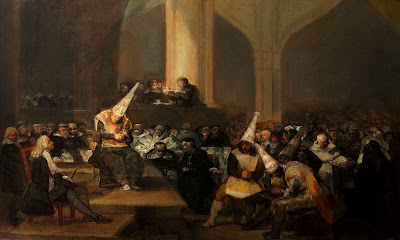 Re-think and act accordingly—lest we be judged by our descendants and found wanting.

Until September 6, 2021, I was employed by Providence University College as Assistant Professor of History.  I submitted my resignation on the morning of September 3rd because of my objection to their vaccine requirement for students and employees.  I am grateful for the years I had there, and am thankful for the opportunity I had to teach.  These are treasured gifts that I received from Providence.

My decision to resign is based on the teaching I did in courses such as Western Civilizations and History of Christianity.  In these survey classes I taught again and again about the instances of forced conversion that occurred at various times and places in history. One of the most notorious of such examples is the Inquisition.

The Inquisition was not a single event but rather an on-going practice of ridding society of people who held to dangerous wrong beliefs.

Significantly, such people were given the opportunity to recant through a series of increasingly more oppressive measures, including social stigmatization, imprisonment, torture, and execution.  Those with power used this power in an attempt to forcibly convert people to right belief.

As I’ve thought about the Inquisition, I have observed that the inquisitors demonstrated two notable characteristics: first, a complete confidence that they knew the truth, and, second, love.

Of course there’s fear too, but if fear were the dominant emotion, you could simply eliminate someone with wrong belief without all the hard and gruesome work of forcible conversion.

I believe both implications need to be contested, but I shall not do so here.   Rather, I would ask this of those who support requiring vaccination for employment or education: In what way do you see using your power to forcibly convert those who disagree with you as loving?  If your answer is that doing so is for the good of the individual and society as a whole, I beg you to at least think about how this answer would have been the same as an inquisitor’s answer.  Is this really how you want your world to work?  Do you really think that this kind of behaviour will have positive long-term consequences?

The question for me was, therefore, do I want to be a part of an institution that uses its power (to provide or deprive people of education and employment) to compel people to “right belief”?

I do not know whether the vaccine is as safe and effective as the government has told us it is.  I’m not qualified to make an adjudication on this point.  I am an historian, not a scientist.  What I do know from the history of science is that science can be (and often has been) mistaken.  And what I do know from teaching about forced conversions for many years is that I don’t want to be part of society that condones such behaviour.  The Inquisition could not have conducted its activities if the majority of people did not agree with and perhaps even be grateful for their actions. And so, rather than blame my former place of employment, I beg all of my fellow citizens: Please re-think your support of the forcible conversion of others.

I appreciate that you may believe that you absolutely know the truth of the matter and be filled with love for the vulnerable.  But to pursue this direction may very well lead us down some very dark paths, as history strongly—alarmingly—suggests.

I believe that the way forward is through dialogue with everyone, regardless of vaccine status.  The path forward rejects the violence of exclusion and deprivation.  Re-think and act accordingly—lest we be judged by our descendants and found wanting.  Lest we destroy our democracy, our nation, our neighbours, and ultimately ourselves.

About a vaccine mandate argument: Fallible thoughts from an old and tired (and retired) philosopher