Reframing the COVID scapegoat: Trudeau is the culprit 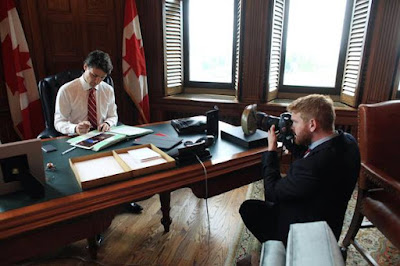 Reframing the COVID scapegoat: Trudeau is the culprit

During the COVID pandemic, Canadians have often been told this: Our public health care system is being overwhelmed.

I don’t dispute this reality, but I ask why.

Why has the capacity of Canada’s health care system not been built up enough so as not to be overwhelmed?

I ask because it strikes me as odd that in our war against COVID—an ongoing war of nearly two years—we have not re-directed resources to the war effort as in wars past.

Prime Minister Justin Trudeau would have us blame unvaccinated Canadians. But I think his narrative lacks insight.

I submit that the ongoing status of our healthcare system being overwhelmed is due primarily to our federal government’s mishandling of our tax dollars. It’s Trudeau who is the culprit.

Here is my reason: PM Trudeau has been engaging in wasteful, frivolous tax spending instead of directing those misspent tax dollars to the war effort.

Lots of examples could be listed, but space permits two.

Example 1. A few weeks ago, our PM and his entourage (276 people) travelled in jets and limousines to attend a climate conference across the Atlantic—a conference that could have been done by Zoom.

Besides the hypocrisy of polluting the world via fuel-guzzling jets and limousines, this trip wasted millions of taxpayers’ dollars. Millions that could have—should have—gone to hospitals.

Reminder: We are in the midst of a pandemic, and our healthcare system is being overwhelmed.

Example 2. Last September the PM called an election during the fourth wave of our COVID pandemic. The election was unnecessary, but the PM saw an opportunity for more power. The election, which changed nothing, cost taxpayers 610 million dollars. $610,000,000. That’s a lot of money.

Reminder: We are in the midst of a pandemic, and our healthcare system is being overwhelmed.

That’s just two examples. The upshot is that in our war against COVID the federal government has missed huge opportunities to increase the number of hospital beds, ICUs, nurses, and doctors across Canada.

For many Canadians, this has been deadly. Not only did COVID take its toll, but so did non-COVID illnesses (due to missed cancer screenings, surgeries, etc.).

The moral fact is that wasteful, frivolous federal tax spending should long ago have been cut and those tax dollars—millions upon millions of life-saving dollars—should have been re-directed to our (the taxpayers’) hospitals. Sure, make vaccines available, but also increase the capacity and threshold of readiness of the health care system. We are in a pandemic are we not?

What about other costs of not increasing healthcare capacity, costs triggered by political policies to cope with the healthcare system’s ongoing status of being overwhelmed?

And what about the PM’s slithery-slippery slide into political authoritarianism by pushing vaccine mandates that smack of coercion and crass government overreach?

Canadians are facing two pandemics: a COVID pandemic and a pandemic of prime ministerial power-mongering and ineptitude.

Hendrik van der Breggen, PhD, is a retired philosophy professor who lives in Steinbach, Manitoba. Dr. van der Breggen is double vaccinated, and he is inclined to think vaccinations are wise (depending on, in discussions with one’s doctor, whether one has a high-risk profile for COVID or not), and he is skeptical about the wisdom and efficacy of COVID vaccine mandates.

Re: “Reframing the COVID Scapegoat: Trudeau is the Culprit”

Some readers of my article have set out variations of the following as a criticism: In Canada health care is a jurisdiction of the provinces, and in Manitoba the Conservatives have a history of making cuts to and weakening the health care system.

Trudeau has publicly blamed the unvaxxed for Canada’s healthcare system’s state of overwhelm (without, I would add, acknowledging the essential services provided by our many unvaxxed heroes over the last two years). By pushing his blame-the-unvaxxed narrative, however, Trudeau sidesteps the uncomfortable truth (uncomfortable for him) that because HE is Canada’s leader in the present war against Covid, HE is ultimately—and PRIMARILY—responsible for Canada’s response to the Covid crisis. Again: HE is Canada’s PRIME MINISTER, so HE should be LEADING us in the war against Covid.

My bit about not letting provinces let their critical health services be overwhelmed fits well with an annual report recently released by Dr. Theresa Tam, who is Canada’s chief public health officer. An article in CBC (December 13, 2021) states the following: “In that document [the annual report], Tam says the public health system is ‘stretched dangerously thin’ after two years of the COVID-19 crisis and a parallel opioid epidemic. To address some of the system's shortcomings, Tam said governments have to earmark more money for public health to bring an end to what she calls the ‘boom and bust’ cycle—a funding pattern where money flows during a time of crisis only to be clawed back when the situation stabilizes. Tam said money should be dedicated to recruiting and retaining health care workers, who have faced challenging working conditions during this pandemic.”

I suspect things may not have been differently handled under different prime ministers. And I would criticize them, too, if they did what Trudeau did. It remains, though, that: (a) Trudeau is our present prime minister; (b) he is scapegoating the unvaccinated; (c) he has wasted an awful lot of taxpayer money that could have—should have—gone to support hospitals, give raises and time off to overworked doctors and nurses, hire and train more staff, plus increase ICU beds, etc.; (d) his irresponsibility has hurt people who suffered from Covid directly or indirectly (by postponed treatments and surgeries); and (e) his irresponsibility has hurt people who suffered from the negative and even deadly effects of lockdowns—lockdowns triggered by the lack of readiness of Canada’s public health care system which Trudeau should have made ready.

Like pretty much everyone else in Canada, I would like to see the Covid situation change for the better. I believe it begins with Canadians demanding our Prime Minister be a better leader and with Canadians not permitting him to pass blame for his poor leadership to Canadians who have reasonable concerns about vaccines (and vaccine mandates).