Rainn Wilson (like Dwight Schrute from The Office) lacks nuance 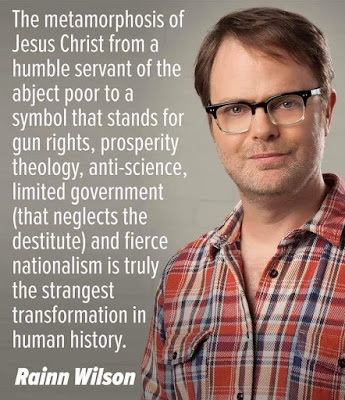 Rainn Wilson (like Dwight Schrute from The Office) lacks nuance

“The metamorphosis of Jesus Christ from a humble servant of the abject poor to a symbol that stands for gun rights, prosperity theology, anti-science, limited government (that neglects the destitute) and fierce nationalism is truly the strangest transformation in human history.”

Yes, it’s amazing how Jesus Christ gets misrepresented over history. I suppose some people like to make their own views look more important by “baptizing” them with Jesus.

But also amazing is how some people—e.g., Dwight Schrute, uh, I mean, Rainn Wilson—can paint the views of others with an overly wide brush. At least many readers might overgeneralize because of his lack of nuance. I think his comment needs some important qualification. It would be much better if it read as follows: “The metamorphosis MADE BY SOME PEOPLE of Jesus Christ from…”

Here are my reasons for thinking this.

Re: Jesus as a symbol for gun rights.

Is Jesus a “symbol that stands for gun rights”? Yes, perhaps for some people, so Wilson’s meme might get some traction there. But he should make FOR SOME PEOPLE clear—to avoid overgeneralization. It should be noted that there are lots of Christians who are pacifists (think of Mennonites and Quakers, for examples). Also, there are lots of Christians who hold to just war theory and limited use of violence if needed, i.e., by the military and the police (I would belong in this group), and not all of these people are for gun rights. Surely the vast, vast majority of these folks—pacifist and non-pacifist Christians, and even those who support the right to bear arms—don’t turn Jesus into a symbol for gun rights.

Also, there are lots of American Christians (and others) who take the threat of tyranny from government (their own or other’s) seriously, since that’s part of American history and its founding ideals (i.e., the seeking of religious freedom from overbearing, persecuting governments). Incidentally, the U.S. isn’t alone in this. My Dutch cousins, after they did their stint in the Dutch military, had to take their rifles home. Why? Because of the Dutch experience with Nazi occupation. I don’t think many of these people turn Jesus into a symbol for gun rights; rather, it’s more of a case of taking seriously Jesus’ teaching about sin and the fact that power can easily corrupt those who hold it.

It seems to me that Rainn Wilson’s meme has SOME truth in it regarding guns, but we should be careful not to generalize—which is what his meme does and which the uncritical reader probably won’t notice. His meme needs qualification, in other words, so it doesn’t mislead. (Yes, that’s a drawback of memes, but, still, careful communication is needed, especially if one is attempting to discredit the views of a specific sub-group of people.)

Re: Jesus as a symbol for prosperity theology.

Yup, that’s happened with some large segments of contemporary Christianity, especially those with high profiles in popular media. I’m thinking of Joel Osteen and his prosperity gospel as well as the various similar televangelists of the past, such as Jim and Tammy Baker. Also, I’m thinking of Benny Hinn and others (a few years ago I stumbled across a televangelist whose last name is “Dollar”!). In addition, I’ve heard about other pastors in recent news who have multi-million dollar homes. Such “Christianity” misrepresents Jesus, for sure, as a cursory reading of the New Testament would make clear. I suspect many people simply don’t read a whole lot these days, at least not carefully.

Again, though, it seems to me that Wilson’s meme needs some qualification on the prosperity theology bit, since the “metamorphosis” in question is not as wholesale or widespread as the meme would make it seem. The vast, vast majority of Christians today and through history are not subscribers to prosperity theology. These folks hold to a theology of humility and suffering in which even Jesus—God—humbles Himself to become human and suffers along with humans. Such folks usually don’t get on TV or on the news.

Re: Jesus as a symbol for anti-science.

No doubt there have been and are SOME Christians who are “anti-science” (e.g., some [not all] anti-vaccine folks, some anti-evolution folks especially in the days of the 1925 Scopes Trial, some climate change deniers). But Wilson’s meme needs to take into account the rich history of Christians who played major if not crucial roles in science. The following were Christians who were crucially important in the scientific revolution: Copernicus, Galileo, Kepler, Boyle, Vesalius, etc., etc.

Sure, there was a huge conflict between Church authorities and Galileo. But it’s important to remember that the Church was willing to entertain Galileo’s view as a hypothesis that was even superior to the Ptolemaic earth-centered view, but Galileo refused.  (In Galileo’s day the Copernican sun-centered view wasn’t as well-evidenced as it later came to be; the scientific community of Galileo’s day wanted further proof, and reasonably so.) Instead, Galileo went ahead and promoted his view publically in a book that insulted an otherwise sympathetic Pope. As a result, Galileo landed in hot water (house arrest). It wasn’t just because of the insult to the Pope, though, it was also because other scientists (not just theologians) were unsympathetic to Galileo’s view for scientific reasons (i.e., there were competing scientific paradigms, as the historian of science Thomas Kuhn would say, and Galileo hadn’t solved all the objections to the Copernican paradigm).

Also Wilson’s meme should take into account Christians such as the following: Michael Faraday (Faraday belonged to a very conservative Christian sect, he discovered the laws of electromagnetism, and is known as a “father of electricity” along with the likes of Thomas Edison); Gregor Mendel (Mendel is the Austrian Christian monk whose experiments began the science of genetics); Georges Lemaître (this Belgian Catholic priest and physicist showed that Albert Einstein’s equations concerning gravity allow space itself to expand and Lemaître connected this to Hubble’s observations that distant galaxies were flying apart, and thus we got a beginning to the universe, now known as the Big Bang). (By the way, I studied the history and philosophy of science for my undergraduate and graduate degrees at non-Christian universities. Subsequently, I had my philosophy of science classes watch and write review papers on the fine NOVA films on Galileo, Newton, and Einstein at the beginning of the semester to help them become familiar with the history of science, which was news to most students.)

Also, as far as I can tell, there are lots of Christians today who are scientists and who are pro-science. Think of the evangelical Christian Francis Collins, M.D., Ph.D.  Collins was director of the U.S. National Institutes of Health, former director of the Human Genome Research Institute, and recipient of the U.S. National Medal of Science. One of my friends was a book review editor for the American Scientific Affiliation and is now president of its Canadian cousin, the Canadian Scientific and Christian Affiliation (this affiliation is loaded with Christians who are scientists). One of my former colleagues is a super-highly-respected biologist. When I was PhD student at the University of Waterloo, the head of the physics faculty was a Christian.

Rain Wilson should acknowledge this sort of stuff, to avoid feeding a popular misconception about Christians in general being anti-science. (This is how propaganda works: take what might be true of some individuals or a subgroup and generalize to the larger group. Wilson should stick to acting, not propaganda.)

Re: Jesus as a symbol for limited government that neglects the destitute.

Here I think that it would be fair to Christians to note that Christians differ on what the government’s role should be. Some (many) think big government is good. Some (many) disagree. As far as I can tell, those Christians who think the role of government should be limited also think that the poor and destitute should be looked after by social programs run by local communities. The idea is that the government is too distanced from the needs at hand and government involves too much (expensive) red tape, whereas groups that minister to the poor are living closer to those in need, can thus discern people’s needs more accurately, and can use money more efficiently (and there’s more money to be used because of fewer taxes and less red tape). I’m thinking here of groups like Samaritan’s Purse, Mission to Children (my wife used to work for this group), World Vision, Salvation Army, Little Sisters of the Poor, Hope Manor (a group my wife also used to work for), Siloam Mission, Choice42, Crisis Pregnancy Centres, church-sponsored homes for refugees, church-sponsored orphanages (my wife and I used to support one of these for several years), etc., etc. So it’s important not to misrepresent Christians who favour limited government as if they also don’t care for the poor—which is what Wilson’s meme does.

Re: Jesus as a symbol for fierce nationalism.

Again, this may be true of some, but not of the vast majority. Generally, followers of Jesus hold that Jesus is King of kings—and that Jesus’ kingdom is not of this world (as Jesus said to Pilate).

Yes, some people, whether Christian or whatever, often co-opt historical figures or events for their own purposes. But it’s unfair, it seems to me, to suggest (as the Rainn Wilson meme does) that all people of particular group do such co-opting, when in fact only some do.

Hendrik van der Breggen, PhD, is a retired professor of philosophy who lives in Steinbach, Manitoba, Canada. And Hendrik loves The Office!!!