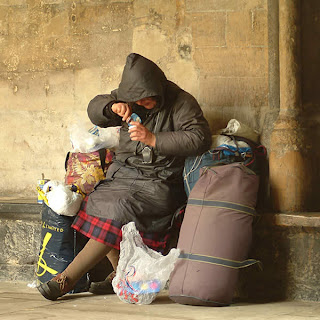 Recently, the abortion issue hit the news in Canada when some conservative MPs challenged the government's funding of International Planned Parenthood Federation, an agency that's well-known for its promotion of abortion.

As I observed the public discussion of this news (e.g., by looking at the online comments on CBC News), I was dismayed at the problematic nature of many of the so-called "pro-choice" arguments.

Here are three of those arguments, plus my assessments.

Pro-choice argument 1: Abortion is about a woman's body only, so nobody else should have a say in the matter.

Assessment: The premise is not true. Abortion is not just about a woman’s body. When a woman is pregnant, there are two bodies that are of concern—the mother’s body and the child’s body.

Moreover, society in general—and the father in particular—should have a say in the matter. Why? Because the unborn child is a human being and thus a member of the human family.

Assessment: Some perspective is in order here. Rape accounts for less than one percent of abortions in Canada, so in Canada rape doesn’t justify all abortions. To think that it does is to commit the fallacy of hasty generalization.

Also, the rape-justifies-abortion argument assumes the unborn child has no moral right to life, so in the context of the abortion debate, the argument commits the fallacy of question begging (it assumes as proven/ established that which is at issue).

Also, the awkward but important question arises: Why punish the child for the crime of its father? That is, why turn the unborn child into an innocent victim, too?

Surely, it would be better to do the following: (a) help the innocent child (by, say, adoption); (b) help the suffering mother (by, say, psychological, medical, and financial assistance); (c) punish the rapist (by locking him up as well as seizing his assets to pay restitution to mother and child); and (d) provide policing to prevent rape in the first place (especially in those countries where rape is prevalent).

Rape is terrible. Nevertheless, abortion does not undo a rape. In fact, abortion is an instance of further violence. In addition, there is growing evidence of abortion's negative health consequences for the mother, so abortion as a "solution" to rape may make matters worse for the rape victim.

Pro-choice argument 3: If you don’t believe in abortion, don’t have one.

Assessment: This argument simply ignores the arguments of those who think that the unborn are human beings and deserve protection.

To those who think that the unborn are human beings and deserve protection, this argument has the same force as saying, “If you don’t believe in slavery, don’t own one.” Or, "If you don't believe in murder, don't kill anyone." This “pro-choice” argument assumes that beliefs about human rights and the application of such beliefs in life are limited to one’s personal sphere only. But such an assumption is a mistake.

In closing, we should note that most abortions in Canada (over 90%) occur because of social problems. But, surely, social problems require social solutions—not killing.

It's an unjust solution. It’s wrong.

P.S. For a startling yet hope-inspiring look at the abortion issue, I encourage readers to visit heartchanger.com and view the 33 minute movie 180.

Note: My other columns on abortion can be found here:

An excellent post! Thank you for having the courage to place your neck on the line with this issue. As you know, many people would take umbrage with your position, so you have a lot of courage to speak it so publically.

Thanks Kane -- it's good to hear from you. "Umbrage." I like that word.

Here is a pro-life advertisement with a style that's becoming quite familiar (thanks in part to Richard Dawkins and friends): LifeSiteNews.

I agree with the thrust of the bus-ads, but I disagree that life begins at conception: the egg and the sperm are both alive when they combine to create a more complex life. There's never a point when organic matter that grows isn't alive. And if there is, we'll have to change our definition of death post-haste.

Great post, the 'pro-choice' arguments are so weak its difficult to see how people can be persuaded of them. The link to the Pro-life advertisement is absoluteness classic, I'll be using that for another blog on abortion in the future.

Kane, some clarification is in order. At conception there is a fusion of sperm and egg, and a new life form begins. The new life form is neither egg nor sperm; rather, it is something substantially different—i.e., a different substance/ a different living entity. Conception marks the physical-spatio-temporal genesis of a genetically distinct self-governing dynamic organism. In the case of human sperm and human egg, this organism marks the first stage of a new living human entity, a new living human individual—a new living human being. That's the sense in which life begins at conception.

Thanks, Dan. It's good to hear from you. Best regards to you.

Hmm... I'm never against pro-choice. I'm also not against pro-life. I just don't think that being 'against' anything in this regard solves much. Combat -- whether verbal or physical -- really doesn't make much sense when the reality being fought against is destruction. Why add combative intentions to an already destructive act?

But besides that, it doesn't make sense to be against another's free choice unless you're willing to set aside your own inherent status as a freely choosing creature.

So, ontologically, I cannot be 'against' pro-choice. But my own personal choice for my own life is non-supportive of abortion. But it's not for me to choose to remove choice from anyone else. I don't have to live with anyone else's conscience, so they are welcome to choose whatever they'd like. As long as their choices don't impinge on my life, I'm free to disengage from their perspectives or actions.

So you're okay with me choosing to have a slave or two, as long as I don't kill them? I doubt that you would say yes. (And I'm glad that you wouldn't say yes.)

Kane, you wrote: "[I]t doesn't make sense to be against another's free choice unless you're willing to set aside your own inherent status as a freely choosing creature."

This is false, surely. I can maintain my (and others') inherent status as a freely choosing creature yet be against, say, Marc Lepine's free choice to shoot women at the Ecole Polytechnique massacre. This makes sense -- good sense.

Kane, I'm glad that you choose to be "non-supportive" of abortion. But if unborn children are actual human beings as, say, Lepine's victims are human beings (albeit the former are at an earlier developmental stage than the latter), and if human beings have equal inherent moral worth, shouldn't it be incumbent on us morally to "remove the choice" to destroy them?

You responded to me with, "So you're okay with me choosing to have a slave or two, as long as I don't kill them?"

Rather than simply say 'yes' or 'no,' I'd like to ask you a practical question: what does what you choose to do with your life have anything to do with me?

In your example of Marc Lepine, you noted that, "I can maintain my (and others') inherent status as a freely choosing creature yet be against, say, Marc Lepine's free choice to shoot women at the Ecole Polytechnique massacre. This makes sense -- good sense."

Absolutely you can be against that. But clearly your stance against it really can't do anything to prevent it. The same holds true with abortion: you can be against it, but your personal stance doesn't automatically translate into your somewhat emotionally loaded question, "shouldn't it be incumbent on us morally to 'remove the choice' to destroy them?"

Because of course the answer to that is double-sided: yes you can assume it incumbent on you remove people's choice through various legislations. But on the other side of this, yes, people can reject your choice to legislate against them and do what they're going to do, anyway.

It looks like we're going to argue a bit here. I'm happy with doing so, as long as we do it well (i.e., as long as we reason carefully plus show respect to those with whom we disagree).

You asked, "what does what you choose to do with your life have anything to do with me?" Well, I suppose that if I'm your friend and I'm doing something clearly evil, you might be willing to tell me that I'm doing something evil. I like to think that I'm your friend. So, because you told me that you're never against pro-choice and never against pro-life, I decided that, as your friend, I should point out to you that your position has some weird/immoral consequences, such as having nothing to say about me choosing to have a slave (pro-choice) as long as I don't kill the slave (pro-life). (I was thinking of the Austrian man Josef Fritzl who chose to lock up his daughter in his basement for 20-plus years and chose to rape her often, fathering several children, whom Fritzl also chose to keep locked up.)

About Marc Lepine's murders, you wrote, "clearly your stance against it really can't do anything to prevent it." I disagree. My stance against the murder of women translates into all sorts of efforts to prevent such occurrences: I teach ethics courses and in these courses I teach that all people are made in God's image and thus are moral equals and so shouldn't be murdered; I have taught this ethical position to my sons; I try to be an example to other men in showing respect to women; I support my local politicians in promoting fairness to all in legislation; I write a column in which I criticize ethical theories such as moral subjectivsm, which would put a stamp of approval on the murder of women by the likes of Marc Lepine, Ted Bundy, etc. To be sure, I can't directly prevent the behaviours of the likes of Lepine and Bundy and company, but I can work against such behaviour indirectly, by promoting a moral milieu that respects all people.

Ditto for abortion. In fact (and I don't mean to toot my own horn here), I wrote a book on the abortion issue and all the income from the book went to help women who were facing crisis pregnancy. Plus I sent a copy of the book to each Member of Parliament. Plus I continue to write columns on the issue. Plus I discuss the abortion issue in my ethics courses. Etc.

Regarding your claim that "people can reject your choice to legislate against them and do what they're going to do, anyway," my reply is: Of course they can. But I would quickly add that just because some people are going to, say, murder others regardless of whether there's a law against murder, it doesn't follow that it's a good idea not to have a law against murder.

Kane, I hope that my comments are helpful.

P.S. My seven columns on ethical theory can be found here. My column on subjectivist ethics is here.