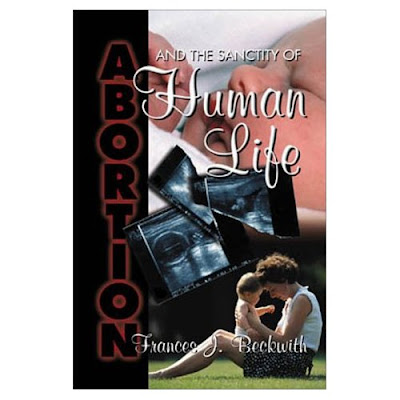 Actually, this "pro-choice" argument is an argument that focuses on the people who are critical of abortion. This argument tells the pro-life proponent that before she can legitimately defend the right to life of the unborn child, she should (a) adopt all unwanted children, (b) give resources to women who are contemplating abortion, plus (c) make the world a more just place. Otherwise, or so the argument goes, defenders of the pro-life position can be ignored.

Baylor University philosopher Francis Beckwith nicely sets out this argument plus offers a helpful assessment, so I quote Beckwith at length.

Beckwith writes: "This argument [i.e., the "pro-choice" argument against pro-life people and their pro-life view] can be distilled into the following assertion: unless the pro-life advocate is willing to help bring up the children she does not want aborted, she has no right to prevent a woman from having an abortion."

Beckwith again (but now in assessment mode): "As a principle of moral action, this seems to be a rather bizarre assertion. It begs the question by assuming that the unborn are not human persons."

Beckwith adds: "Wouldn't we consider the murder of a couple's children unjustified even if we were approached by the parents with the ultimatum, 'Unless you adopt our three children by noon tomorrow, we will put them to death'? The fact that we may refuse to adopt these children does not mean that their parents are justified in killing them. The issue, once more, is whether the unborn are human persons."

Beckwith adds: "Although the pro-life movement does have a moral duty to help those in need, especially unwed mothers (and there are enough organizations dedicated to this ministry to show that the pro-lifers do practice what they preach), the point that I am making is that the unborn do not suddenly become nonpersons and not entitled to protection simply because individual pro-lifers are not currently involved in works of mercy."

Clearly, then, for justice to prevail, truth must prevail.

For an example of evil done to unborn children and their mothers, look at this story from LifeSiteNews. Whether we are "pro-life" or "pro-choice," we can surely agree that the treatment of the women and their babies at the abortion clinic described in this story is just plain wrong, period.

For an example of slippage from abortion to infanticide, look at this story.