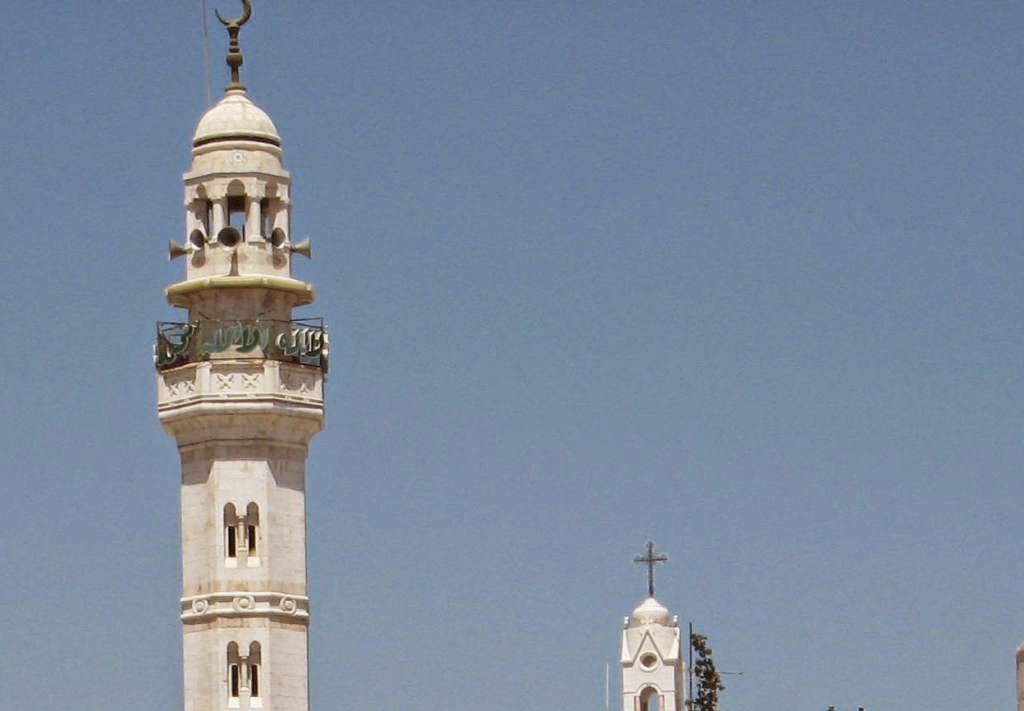 Jesus claims to be the God of the universe (the great I AM) come to earth as a human being. He lives a life characterized by healings, compassion for the vulnerable, and speaking truth to power. He claims he is the way, the truth, and the life, and that nobody comes to God but through him.

Jesus is accused of blasphemy, is unjustly sentenced to death, and dies a horrible, painful death on a cross. A couple days later, however, Jesus is seen physically alive and well by various individuals and variously sized groups, at different times, at different places, over a period of several weeks. (Not so incidentally, the first witnesses to Jesus' resurrection are women, which implies a high view of women, if Jesus is God.)

The risen Jesus teaches that via his death and resurrection Jesus takes our punishment for sin onto himself and he defeats the powers of death, and that his resurrection is a sign for us to trust him—so we should repent and follow him.

The focus of Islam is the man Muhammad and the Qur'an, the allegedly true and complete revelation from God. Muhammad doesn't claim to be God; he claims to be God's latest and greatest prophet.

According to Muhammad, Jesus is an important prophet, but not God in human flesh. Nor did Jesus die on the cross (somebody else did) and so Jesus didn't resurrect bodily after death. Muhammad dies and stays dead.

Significantly, all the Qur'an's revelations about Jesus come to Muhammad 600 years after Jesus and 1,000 kilometers away via an (alleged) angel.

Significantly, too, Muhammad's life reveals an extremely violent man bent on world domination by force—and he teaches others to be and do likewise. (It's interesting that the present leader of ISIS has a PhD in Islamic Studies.)

Muhammad ordered his followers to kill "infidels," i.e., those who don't agree with his views about himself and the Qur'an.

Moreover, Muhammad ordered various assassinations. On one occasion, he ordered the assassination of a mother of five (killed while she was breastfeeding one of her children). Also, Muhammad beheaded over 500 Jewish men and teenage boys, while his followers sold women and children into slavery.

Unlike Jesus, who shed his own blood for others to spread his message of reconciliation to God, Muhammad shed the blood of others to impose his message.

Also, Muhammad had a low view of women (their testimony is worth half that of a man, more women than men will be in hell), and he married a girl when she was six, consummating the marriage three years later.

So, Jesus or Muhammad?

I respect my Muslim friends and neighbours, and I will defend their right to exercise religious freedom (within what Princeton philosopher Robert P. George calls "the broad limits of justice and the requirements of the common good"). Nevertheless, I choose Jesus.

Significantly, the historical evidences for Jesus' life, death, and resurrection are close to the events temporally and geographically, in fact, closer than Muhammad's—the Qur'an's—claims to the contrary (because, as I mentioned, the historical evidences for Jesus contain accounts of eyewitnesses and close associates of eyewitnesses, whereas the Qur'an's testimony comes 600 years later and 1,000 kilometres away).

Thus, the evidence for Jesus allows me to take Jesus seriously as God in human flesh.

Here is an important article: "Islam and Christianity not comparable" by Larry Taunton.

Another important article: "Let's stop expecting Islam to be Christian" by Joe Carter.