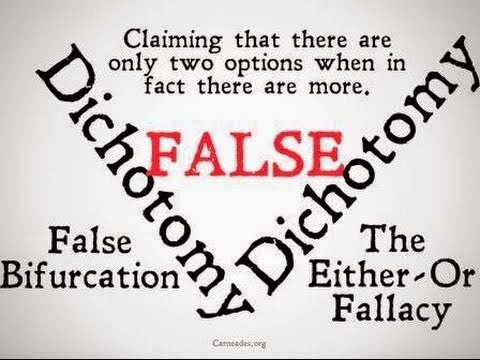 The false dichotomy fallacy (a.k.a. false alternatives fallacy) is a mistake in reasoning which occurs when we assume that there are only two options, when there are actually three (or more), yet we go on to assume that one of the two options must be the way to go.

Here’s an example from logician Trudy Govier. Let’s say that I tell you everything is either black or white. This is a false dichotomy. Why? Because the truth of the matter is that there are shades of grey (apparently at least 50!) as well as shades of red, orange, green, etc.

The false dichotomy fallacy is a silly mistake to make, but, alarmingly, in public discourse today there seems to be a lot of folks making it!

Here are some examples I've noticed in newspapers, Facebook, etc.

Either you agree with Muslims or you hate/ fear them, so don't disagree. Missing third option: disagree in love. Surely, love precludes neither respectful disagreement about truth nor careful inquiry into the historical grounds of a religion.

Either you bring an unwanted child into the world or you abort the child, so permit abortion. Missing third option: instead of killing the baby, help the pregnant mother and find a home with parents who will adopt and love the child. Added bonus: killing human beings doesn't become a solution to social, psychological, or economic problems.

Either use leftover frozen human embryos (human beings) for research (which kills them) or throw them out (which also kills them), so use them for research. Missing third option: let the embryos be adopted and implanted by parents who want them (yes, there is an adoption agency for this). For further thought: maybe we shouldn't even make human beings in a Petri dish in the first place, since successful in vitro fertilization requires the making and probable destruction of "leftovers."

Either we have infallible complete knowledge, or we can’t know anything truly, so we should be skeptical of knowledge. Missing third alternative: we can know some things truly, albeit fallibly and non-exhaustively. Case-by-case investigation is needed.

Either we justify Christianity in terms of faith (trust, subjective/ spiritual experience) or via reason (evidence, arguments), so go with faith only because, well, it takes less effort. Missing third alternative: embrace both—seek a reasonable faith.

Either (a) I am both Christian and LGBTQ-affirming (in terms of biblical doctrine on sexual practice) or (b) I am either Christian or LGBTQ-affirming (but not both); so, because LGBTQ folks can in fact be Christians, I and other conservative-leaning Christians should pick (a).

Missing third option (c): we should be genuinely hospitable to those who self-identify as LGBTQ and/or have such dispositions—i.e., we should genuinely love and respect such persons and communicate to them that they have worth, are made in God’s image, and are truly loved by God—AND we should think critically about gay-revisionist interpretations of Scripture, showing (gently and respectfully, yet academically rigorously) that good reasons and evidence favour the view that sex ought to be reserved between one man and one woman in monogamous marriage.

In other words, we can be Christian (and know God loves us) and we can struggle against sin (like we all do in various ways).

False dichotomies—don't be deceived by them!