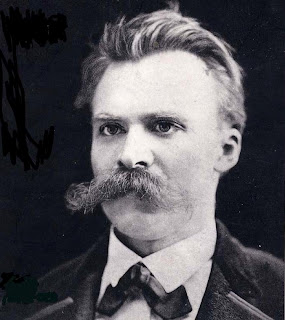 The philosopher Friedrich Nietzsche (1844-1900) has influenced much contemporary philosophy by pushing it in a skeptical direction. How? Via his denial of objective truth and his emphasis on personal perspective. Today I will look at Nietzsche's views concerning truth and knowledge plus I will offer a critique.

Famously, Nietzsche asserted that "God is dead" and "we have killed him." The idea is not only that God doesn't exist but also that we have made Him irrelevant to our lives.

While some people might despair in facing an atheistic and ultimately meaningless universe, Nietzsche affirmed life. Indeed, according to Nietzsche, onto the flux that is the world, the human mind constructs order—invents interpretations—to serve the life interests and values of the individual. Moreover, there are only interpretations, no facts. Also, these interpretations are not for truth’s sake, but for survival, health, and the increased domain of our "will to power." In other words, our interpretations—i.e., our perspectives (interpretive judgments concerning facts and values grounded in our interests, background assumptions, conceptual schemes, languages)—do not correspond to reality; they are merely useful.

Appropriately, Nietzsche addresses the concept of truth: “What then is truth? A movable host of metaphors, metonymies, and anthropomorphisms….Truths are illusions which we have forgotten are illusions.” Nietzsche adds: “Truth is the kind of error without which a certain species of life could not live.” Moreover, Nietzsche writes: “There are many kinds of eyes. Even the sphinx has eyes—and consequently there are many kinds of ‘truths,’ and consequently there is no truth.”

Because different people have different styles of survival and health, which arise from their various subjective aesthetic values (tastes) coupled with the exercise of their will to power, the result is a plurality of perspectives, but no truth. Whatever interpretation serves one’s aesthetic interests in the project of affirming and enhancing one’s life is the way to go. Or so Nietzsche would have us think.

Should we agree? Surely not. Thinking people should be skeptical about Nietzsche’s denial of truth and Nietzsche’s perspectivism. Consider the following problems for Nietzsche's views.

But perhaps Nietzsche (or a present-day postmodern disciple of Nietzsche) might reply that there is a missing option: (C) it’s all perspective, but it’s pragmatic for us all to accept perspectivism, for the sake of life. It turns out that this option is problematic too.

First, if C is set out as a truth and not merely a useful claim, then C self-refutes. That is, C would be set out as a non-perspectival truth claim about the usefulness of perspectivism, a claim that transcends perspectives, which C precludes (because, according to C, it’s all perspective).

So, if option C is the case, then either there is a self-refutation or an infinite regress. Either way, C falters too.

In other words, Nietzsche’s claim that it’s all perspective, all interpretation, doesn’t hold.

Therefore, Nietzsche’s perspectivism does not block our knowledge of the world. As a matter of fact, the obvious remains: there are truths, there are facts, and many of these can be known (albeit fallibly and non-exhaustively).

Significantly, these known truths and facts serve as the ground for interpretation to occur in the first place, and this allows us to do science, history, natural theology, etc.—and apologetics.

P.S. The above column is a slightly revised excerpt from my article, "Awakening from the Nightmare: A Critical Overview of Friedrich Nietzsche's Philosophy," which will be published in Christian Research Journal, Volume 34, Number 01 (January/ February 2011):34-41. If Apologia readers are interested in reading the whole of my article on Nietzsche (along with some additional apologetics-related articles), please be advised that Christian Research Journal can be purchased here.

NOTE: My article "Awakening from the Nightmare: A Critical Overview of Friedrich Nietzsche's Philosophy" is now available online.

It's kind of odd how such an hyper-intelligent man could spin-out a philosophy that breezes past the three main building-blocks of logic:

Though I will admit that despite Nietzsche's logical shortcomings (or should that be stated, "illogical steadfastness"?), he rocked the philosophical world to its core, and set the stage for a whole new breed of thinkers.

Yes, there is no doubt that Nietzsche has greatly influenced the philosophical world. University of Cambridge philosopher Simon Blackburn, in his book Truth: A Guide (Oxford University Press, 2005), says this of Nietzsche: "He is the patron saint of postmodernism" (p. 75).

For more on Nietzsche's thinking, see my article "Awakening from the Nightmare: A Critical Overview of Friedrich Nietzsche's Philosophy" (to be published in the next issue of Christian Research Journal).

Thank you for your critique of my critique on my blog. I will be sure to respond to it as soon as possible.

To sum-up my response to you, however, I will say that you are right about my mistakes on a couple of points (e.g., the issue concerning the tiger), but we continue to disagree on a couple, also. Those things will be clearer when I respond to you.

Until then, two things:

1. I received your letter; thank you.

2. Brace yourself for a full-frontal counter-apologetic that will unhinge your intellectual confidence. ;) I'm just kidding. I am, however, looking forward to interacting with you more on the issue of Rational Warrant.

In spite of our philosophical differences, we will do our best to let truth and good reasons be our common master. And if we continue to disagree, I'm sure we can do so respectfully.

For those readers interested in Hume's argument against miracle reports: My Christian Research Journal article on this topic has been updated (i.e., endnote errors have been corrected and missing side bar on five senses of miracle has been added). Here's the link.

I will read your article with relish. Though I'm not sure how much my eyes will enjoy the relish. Might hurt.

Anyway, I have it open and will be reading it possibly tonight (Nov. 30th).

mmm, I am rather late coming to this post, please forgive me if my comments are out of date with your present thinking. But might I suggest you find a copy of Jessica N. Berry's "Perspectivism as Ephexis in Interpretation" for a different interpretation of Nietzsche's perspectivism. As a rule of thumb, if one finds a philosopher so easy to refute, it is often (but not always) a result of a less than generous reading.

Paul McNamara: Thanks for your note. I see that Jessica N. Berry has a book, Nietzsche and the Ancient Skeptical Tradition (OUP). I notice too that a reviewer writes that her interpretation "looks somewhat forced at times." Nevertheless, I will take a look. Thanks again.