About anti-Logos: Exposing the darkness 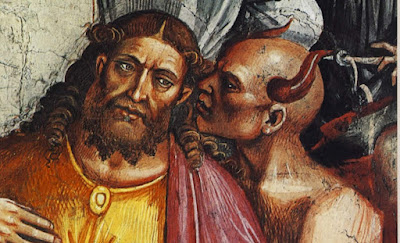 “The Deeds of the Antichrist” (c. 1501) by Luca Signorelli; detail showing the Antichrist directed by Satan (fresco in Orvieto Cathedral, Italy)

About anti-Logos: Exposing the darkness

The spirit of our age is Anti-Logos—a.k.a. Anti-Christ—and his name is Legion.

Philosophically, the concept of anti-Logos helps me understand all the dark goings-on in the world (and in my soul).

Keep in mind that the Logos—the divine Word/ Reason/ Logic/ Wisdom who is personal—permeates the universe (though isn’t the universe), giving it order, harmony, goodness, and beauty, and has made the universe intelligible to human minds by having created it as well as us (though our knowledge is fallible and non-exhaustive). Keep in mind that Jesus is the Logos (John 1:1) and we are to follow Him.

With these things in mind, the concept of anti-Logos helps me understand that the disorder, disharmony, evil, and ugliness in the world are due to a rejection of the Logos. It seems to me that human beings are choosing anti-Logos (whether they consciously acknowledge or understand the Logos to be Jesus or not) and, according to the Bible, other beings are also doing so (and apparently some influence us in these matters; 1 Timothy 4:1).

Such a rejection explains at least the following (note 1: the categories/ headings are set out in no particular order, some of the examples probably fit into multiple categories, and probably more categories and examples could be added; note 2: I do not hate the people who engage in any of what is listed, but I hate the activities, of which some/many I am guilty either in deed or in thought):

Disrespect for the image of God in others

Examples: Oppressing/hating others because of race, ethnicity, nationality, vaccination status, religion, sex, sexuality, etc.; elevating group identity (one’s skin colour, sex, “gender identity,” etc.) over individual identity as Imago Dei (note: all individuals are made in the image of God and thus have great individual worth, regardless of disabilities, size, dependency, development, race, sex, etc.); human trafficking (whether the trafficked are adults, children, or the body parts of aborted children); ignoring the plight of the Uyghurs in China; etc.

Examples: Murder in general; abortion (the targeted killing en masse of pre-natal human beings of which the vast, vast, vast majority of killings are not essential for health care); the promotion of MAiD/ Medical Assistance in Dying (a euphemism for doctors killing patients) without first providing accessible and top-notch palliative care for all; etc.

Examples: Radical skeptical philosophy that sees reason, logic, truth, and objectivity as mere social constructions; political spin on news to the point of turning “news” into propaganda; “my truth” versus actual objective truth; growingly inconsistent political policies (whose inconsistencies go unnoticed because of general lack of intellectual acumen and/or shared anti-reason etc. ideology in media and population at large); etc.

Rejection of one’s sexual design as male or female

Examples: Transgender ideology (e.g., embracing “feeling” over physical reality when the feeling doesn’t correspond with physical reality [note: when it comes to anorexia nervosa we rightly tell people who “feel” they’re overweight when they in fact aren’t that they’re mistaken, but such correction is now alleged to be “transphobic” when it comes to the transgender issue]; drag queen story hours for young children (which confuse young children about sex, to say the least); allowing men to compete in women’s sports because they “identify” as women; etc.

Examples: “Otherkin” (i.e., people who believe they are cats, dogs, or dragons).

Examples: Desiring others’ spouses (I’m reminded of the old and seemingly innocent song “I wish I had Jessie’s girl”); desiring or envying the riches/ possessions of others; desiring power over others, etc.

Examples: False advertising, fake news, broken political promises, deliberate use of ambiguity or vagueness to hide/distort truth (e.g., “products of conception” or “clump of cells” or “parasite” to describe pre-natal human beings so they can be dehumanized and killed; e.g., “medical assistance in dying” to describe doctors killing patients); historical revisionism about racism (e.g., falsely claiming that only whites are racist and have been slave owners and are evil, and indoctrinating school children to think this); epidemiologists saying anti-racist protests are not a Covid concern but also saying anti-lockdown protests are a Covid concern; U.S. government officials lying about funding of research at a Wuhan lab; Ontario doctors falsely stating that in MAiD cases the cause of death is a disease that’s not the cause of death (when it’s actually the doctors’ poisons that cause the death in MAiD); U.S. media lying by saying Rachel Levine is “the first female four-star officer of the U.S. Public Health Service Commissioned Corps” (Levine is a man who “identifies” as a woman, he is not female); doctors telling girls who feel they are boys that they are boys and then performing double mastectomies on those girls (aided and abetted by schools and media); authorities calling abortion, MAiD, or Covid vaccination a “choice” or “option” when real alternatives—respectively: pregnancy care centres, palliative and hospice care, and alternative treatments/ remedies along with continued employment—are not made readily available; historical biblical revisionism by so-called “progressives” (to make the Bible affirm morally what it doesn’t affirm morally or to say miracles such as Jesus’ resurrection did not occur or cannot be known to have occurred); etc.

Examples: Neglecting care and stewardship of God’s good creation; dumping garbage into oceans and rivers; disallowing pipelines of liquefied natural gas that could reduce dirtier energy use; importing oil from countries (notorious for human rights abuses) via pollution-promoting ships and trucks; general stupidity and hypocrisy (e.g., world leaders and their entourages gather in Scotland in person during pandemic for climate concerns conference in hundreds of fuel-guzzling private jets and limousine motorcades when all of this could have been done safely [health-wise and pollution-wise] and cheaply [tax-wise] via Zoom); etc.

Examples: Self as #1, my feelings as #1, political leaders/ parties/ ideologies as #1, etc.

Example: U.S. military withdraws from Afghanistan before the people it’s supposed to protect have been evacuated (plus leaves millions of dollars’ worth of weaponry for enemies who are known to oppress women, murder gays, engage in terrorism); etc.

(As I mentioned, more categories and examples could be added.)

What I’m getting at is that the concept of anti-Logos is helpful in understanding the popular idea that the self and its desires are, or take the role of, God. The human “I am” becomes—pretends to become—the great I AM (Exodus 3:14-15). God’s design and wisdom are rejected for merely human designs and agendas that aren’t centred on God/ the Logos. The Logos—true wisdom and understanding—is rejected and anti-Logos embraced. Light is rejected and darkness embraced. As a result, the human creature becomes morally ugly, delusional, and stupid. The world becomes insane.

This helps me understand the dark goings-on in the world (as well as in my soul).

Jesus is Lord (God who became human flesh). Jesus is the Christ, the Logos. Thus, whatever is anti-Logos is anti-Christ.

Anti-Christ is the spirit of our age—and his name is Legion.

My prayer: Lord Jesus, help us return to truth, goodness, and beauty. Amen.