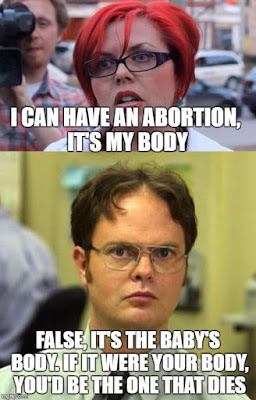 
I have followed the abortion debate since the 1980s. After investigating the issue, I became pro-life, while acknowledging that there may be truly difficult circumstances in which an abortion might be justified (i.e., in the rare case in which the physical life of a mother is truly threatened by continued pregnancy). My wife and I have also supported local crisis pregnancy centers.


Over the years I’ve written much about the logical and factual weaknesses of so-called “pro-choice” arguments, and won’t rehash them here (see my online articles or my book, if interested).


What strikes me as new and disconcerting is a twist in today’s “pro-choice” view.  Abortion defenders used to argue that abortion should be legal, safe, and rare—the option of last resort. Now, for many, abortions have become something to brag about.  Enter: Shout Your Abortion.


The Shout Your Abortion (SYA) campaign seeks to “denounce the stigma surrounding abortion.” SYA co-founder Amelia Bonow describes abortion as an “incredibly positive experience” with no need for “sadness, shame or regret.”


The SYA website provides stories of women who seem to see abortion as the best thing since sliced bread.


She says she “goofed” in getting pregnant the first time because she didn’t use a condom. She says she got pregnant the second time because she had sex with a fellow while out hiking (and her backpack was apparently too heavy to carry a condom). She says the third pregnancy occurred (with a new boyfriend) because her pill failed and she simply couldn’t go through with the pregnancy. Why not? Because she had landed the “ultimate seasonal job” at a national park.


Heather has “ZERO regrets.” She adds, “All in all I just wish that people would look at abortion as just another surgery. No way could I be a mother of three children right now! JUST NOT POSSIBLE! I am 23, I have a good life, I don’t want to destroy it because of a bunch of children that I am not ready for.”


And she asks, “Why do people think that I should have a child because of an accident? Why should I be forced on changing my life for something that I never wanted?”


Clearly, Heather is using abortion as a form of birth control, and she is unaware abortion has risks for her own health (e.g., breast cancer) and the health of future children (e.g., premature birth), not to mention the health of the three children she aborted (i.e., killed).


There is much that can be said as a critique of Heather’s thinking (and the SYA campaign generally), but I’ll simply provide these insightful comments from David MacKenzie, Executive Director of Evangelical Office of the Public Square.


“Why do people think that I should have a child because of an accident? Why should I be forced on changing my life for something that I never wanted?”


David’s response: “Let us ask another question. Why should I have to experience heat and not just light when I build a campfire? Why should I be burned when I touch flame?”


“Well, because the two are fundamentally connected, and yet this generation has been strangely taught to expect the one without the other.”


“You have divorced heat from light, and I'll leave it to you to decide whether it is the campfire that is being unreasonable, delusional, or psychotic—or whether it's you.”


Shout your abortion? No, please don’t.


Instead, think carefully, exercise self-control, and stop killing children to avoid responsibility for those children.


Update: At time of my submitting this column to The Carillon, Heather's story got deleted from the Shout Your Abortion website. Turns out that the photo of Heather was not of Heather, but of a pro-life woman named Molly. For further information about “Heather’s story” see here and here.


Note to Apologia readers: Future Apologia columns will appear once monthly (instead of twice monthly), during the first week of each month.
Posted by Hendrik van der Breggen
Email ThisBlogThis!Share to TwitterShare to FacebookShare to Pinterest
Labels: Abortion, Shout Your Abortion