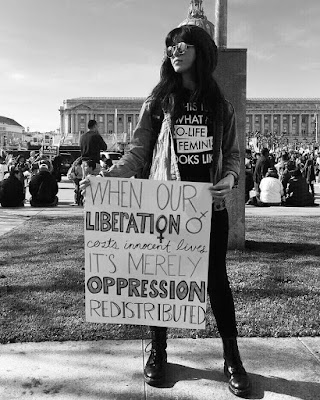 Below are some popular arguments for abortion choice followed by some pro-life replies. These pro-choice arguments are real (from a critic of one of my recent articles) and so are the replies (which I presented as responses).

I hope the interaction between this critic and me will encourage careful reasoning in Canada's public discourse on abortion.

Pro-life reply: But there are two bodies.

2. Pro-choice argument: The fetus is a potential human being.

3. Pro-choice argument: A fetus is no more human than a cluster of skin cells is human.

4. Pro-choice argument: The fetus is a parasitic organism.

Pro-life reply: Nope. A parasite is an organism of a different species which invades the host. The fetus, on the other hand, is a new human being invited (created) by the host via having sex or IVF (in vitro fertilization).

5. Pro-choice argument: “I’m not saying the fetus is a true parasite, only that the nature of the relationship is parasitic…. Don’t be petty.”

Pro-life reply: But your parasite metaphor/analogy is problematic at the get-go. Why? Because the fetus and its relation to mother is by nature/biology NOT parasitic. (To point this out isn’t being “petty,” it’s being logical and evidence-based.)

6. Pro-choice argument: Consent to sex is not consent to pregnancy. Condoms break and pills fail, so the fetus’s creation is not always invited.

Pro-life reply: Not true. Consent to sex (whether condoms or other forms of contraception are used or not) involves consent to risking the outcome, which is to risk—and thereby invite—pregnancy. Saying no to or “disinviting” the deliberately risked outcome (we KNOW contraception isn’t 100% foolproof) is like gambling at Las Vegas and demanding one’s money back after losing it. Taking a risk entails taking responsibility for that risk.

7. Pro-choice argument: “a fetus that is not viable outside its mother’s womb is not human.”

Pro-life reply: This is simply false. Viability is a measure of whether an unborn child or fetus can survive outside the womb. In effect, viability is a measure of our medical/ technological sophistication to help the pre-natal child live if born prematurely. Viability is NOT a determinant of whether the fetus is human. Being human depends on whether a creature is an individual entity belonging to the biological species of human, which is what the fetus is, whether viable or not.

8. Pro-choice argument: A fetus “is a part of the mother.”

Pro-life reply: This is a popular and easy mistake to make, but it’s still a mistake. A fetus is CONNECTED to the mother, but not a proper part of the mother (like a piano is connected via straps to a mover’s truck but isn’t a part of the truck). To think the fetus is part of the mother leads logically to absurd/ contradictory results—e.g., a woman has eight arms and three penises if pregnant with male triplets—so is problematic. (For more on this topic, see here.)

Conclusion: Please think, for the sake of children.

Hendrik van der Breggen, PhD, is Associate Professor of Philosophy at Providence University College. The views expressed in this column do not always reflect the views of Providence.


Past APOLOGIA columns concerning abortion, for additional reading and study:

I may have told you about this incident before. If so, my apologies. I know that few arguments are actually original, and the more to be distrusted if they really are. Anyway, a story:

A friend of mine, a conservative BIC minister, son of an even more conservative minister, recalled to me the death of his mother in childbirth. His youngest brother was still-born, dying with their mother. He recalled the funeral, which was held only for his mother. He asked why they had no funeral for his brother. His father replied that his brother had not drawn breath, and quoted Genesis, "God breathed into him and he became a living soul."

We may question his exegesis (and I do), but he makes a theological point -- that the fully human person is both body and soul, and that God breathes the soul into the body when the infant first draws breath. He was fully pro-life and would have never considered an abortion, but on theological grounds he held that the fetus is potentially human, not yet actually human. One can make a similar argument on cultural grounds. I know that some cultures have held the same belief.

All of which is to say that you may have dismissed #2 (and its variants in the list) too quickly. It is at least worth further investigation.

Thanks for the comment, Daryl. It's a sad story.

I agree that the exegesis you mention is questionable, to say the least. Theological and cultural interpretations aside, I think the issue at hand in the discussion in which my pro-life replies are set out (see original article) is this: What is the unborn, biologically?

My pro-choice interlocutor argues it's merely a parasitic clump of cells, no more human than a clump of skin cells, and is only a potential human being (and isn't viable, etc.).

As I've argued, the fetus isn't a parasite and isn't a mere clump of cells (and viability is totally off the mark, etc.). The fetus is a different entity. What is that entity?

Maybe the following will help: Is the fetus a human being?

Certainly a basic question in the discussion concerns the personhood of the aborted fetus. Arguments that treat the fetus as an inconvenience do not persuade me. But personhood is more than simply biological life. There is a cultural component, and there is a theological component.

I am not making an argument for abortion, but noting that I also find some arguments against abortion problematic in their unwillingness to deal fully with these aspects of human-ness. This forum means that your arguments are perforce preliminary, so I don't know how I would evaluate them when you give them in depth, nor have I studied these issues in depth. This caveat means that I hold my own views with some lightness, convinced that abortion is wrong, but unsure how to evaluate the gravity of abortion as taking human life.

In your second comment you write: “personhood is more than simply biological life." Okay, but let's at least agree that it's settled that the unborn are in fact, biologically, human beings. They're not potential human beings; they're human beings with potential.

Moreover, it's a person. As philosopher Francis Beckwith points out, “a human person is an entity who has the natural inherent capacity to give rise to human functions, whether or not those functions are ever attained." (Beckwith, Abortion and the Sanctity of Human Life,, p. 75.) What are those functions? Beckwith lists these: capacity to speak a language, engage in rational thought, and have a self-concept. The human fetus has these capacities.

(Significantly, if one argues that the fetus isn't a "person" because the unborn human being lacks specific developmental features which confer personhood, then problems arise. The allegedly decisive features fail because they weaken the personhood of many other human beings who have the right to life. For example, if [present] self-awareness and rationality are the crucial criteria of personhood, then the right to life of newborn infants as well as sleeping, stunned, or mentally disabled persons is jeopardized. The equality in equal rights gets ungrounded.)

There's much more that can be said in defence of the unborn, but I don't have the time at the moment.

You say you are “convinced that abortion is wrong, but unsure how to evaluate the gravity of abortion as taking human life." May I suggest some readings?

Here are two short but deeply insightful books (I'm pretty sure we've got them in our school library):

Francis J. Beckwith, Abortion and the Sanctity of Human Life (2000). (You might be particularly interested in chapter 7 "Christian Faith and Abortion.")

Also, I suggest Scott Klusendorf's The Case for Life: Equipping Christians to Engage the Culture (2009). (You might appreciate these chapters: “What makes humans valuable?" and “Dead Silence: Does the Bible justify abortion?")

P.S. I notice that the respected sociologist Christian Smith in his book What Is A Person? (2010) argues that personhood begins at biological life's beginning: “personhood adheres in each human from the start with everything needed to develop and unfold itself—in nourishing environments, of course—through natural processes of becoming. Persons do not emerge out of capacities and bodies at some chronologically delayed time, only after some crucial development has taken place. Persons exist at the start of life and are their own agents of development and emergent being across their entire life course." (p. 457)