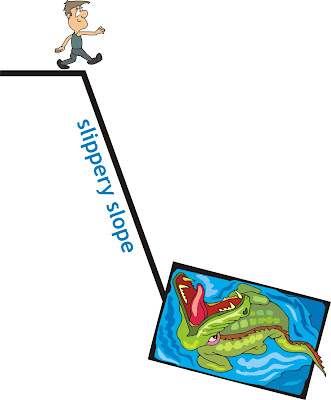 Thanks to Marla Williamson for the above work of art.
APOLOGIA
By Hendrik van der Breggen
The Carillon, April 21, 2011

A slippery slope argument is an argument that claims a particular action shouldn't be taken because this action will result in a series of other actions which will land us in a place that's bad or disastrous. The slippery slope fallacy occurs when the argument's alleged causal connections between the individual actions in the series lack evidence or are implausible.

Sometimes the slippery slope fallacy is called the domino fallacy. As logician T. E. Damer points out, "The name of the domino fallacy derives from the child’s game of lining up dominoes on end about an inch apart and then pushing the first one over, causing a chain reaction of falling dominoes." Damer adds, "The chain reaction works in the child’s game, but not all events are arranged so that a falling-domino effect ensues."

Here is an example of the slippery slope/ domino fallacy (from Damer). A college professor tells the following to her students: “I do not permit questions in my class, because if I allow one student to ask a question, then everyone starts asking questions, and the first thing you know, there is not enough time for my lecture.”

In reply, it should be noted that the asking of a question by one student probably will not end up with the whole class asking questions throughout the class. A question in one student’s mind, when asked and answered, probably will satisfy other students because they too had the same question. Also, the professor can advise students who have further questions to visit her during the professor's office hours.

Here is another example of the slippery slope/ domino fallacy (slightly silly, but helpful). A parent tells his daughter not to chew gum, because if she does, she'll probably begin to smoke cigarettes, which will lead to dancing, then drugs, then theft and murder—and then a lifetime in jail.

Clearly, the causal connections between the events on this alleged slippery slope are dubious. You get the picture.

If I build a campfire directly under a tree in a dry dense forest, there will probably be a domino effect, and we'll end up with a forest fire—so I shouldn't build the campfire.

Or consider this: If I slam on the car brakes and come to a sudden and complete stop on Highway 401 near Toronto during rush hour (the 401 has been referred to as "Canada's busiest highway"), there will probably be a domino effect resulting in perhaps hundreds of collisions—so I shouldn't slam on the brakes on the 401.

Slippery slope arguments—some are fallacious, some are non-fallacious. Careful thinking is required to discern the difference.