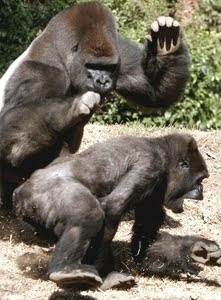 Criticisms of Atheistic Neo-Darwinian Ethics
Atheistic neo-Darwinist evolutionary accounts of ethics tend to emphasize one of two features: (a) the survival of the fittest, or (b) co-operation. Thinking people should examine both accounts. Let’s do this in four steps.

1. Let’s first see what two prominent atheistic neo-Darwinists have to say about ethics in general.

Richard Dawkins writes: “The universe we observe has precisely the properties we should expect if there is, at bottom, no design, no purpose, no evil and no good, nothing but blind, pitiless indifference.” [River Out of Eden: A Darwinian View of Life (London: Phoenix Press, 1995), 133; italics added for emphasis.]

Michael Ruse writes: “The position of the modern evolutionist...is that humans have an awareness of morality...because such an awareness is of biological worth. Morality is a biological adaptation, no less than our hands and feet and teeth.... Considered as a rationally justifiable set of claims about an objective something, ethics is illusory. I can appreciate that when somebody says "love thy neighbour as thyself," they think they are referring above and beyond themselves.... Nevertheless...such reference is truly without foundation. Morality is just an aid to survival and reproduction...and any deeper meaning is illusory....” [Michael Ruse, “Evolutionary Theory and Christian Ethics,” in The Darwinian Paradigm (London: Routledge, 1989), 262, 268-269; italics added for emphasis.]

In other words, these prominent atheistic neo-Darwinists allege that there is no real right, wrong, good, or evil. Rather, our sense/ feeling of "objective morality" evolved into being because it produced survival benefits. Real right and wrong, real good and evil—these are merely useful fictions.

2. Let’s now look at the survival-of-the-fittest emphasis of atheistic neo-Darwinian ethics. On this view the right or good is whatever helps my group (or me) survive.

The problems with this view are obvious. If good and evil, right and wrong, are not real, i.e., are not in any deep sense true and binding on all, and if the governing principle of life is survival of the fittest, then it follows logically that genocide is acceptable if it promotes the survival of my group.

But, surely, we know that, morally, might doesn’t make right. Significantly, this moral knowledge counts against the survival of the fittest neo-Darwinian view of ethics.

3. Okay, now let’s look at the co-operation emphasis of atheistic neo-Darwinian ethics. This is also known as tit-for-tat morality. The idea is that our sense of right and wrong, good and evil, comes from our Darwinian past in which reciprocal altruism occurred: “you scratch my back and I’ll scratch yours”. Morals arose from agreements (explicit or implicit). And agreements arose from our enlightened self-interest, to ensure our survival and allow us to get what we want.

Serious problems arise for the co-operation view, too.

First, the co-operation view discounts our deepest intuitions about real right and wrong as mere suggestions for living, i.e., as useful “rules of thumb,” which evolved. Second, it dismisses our deepest intuition about the intrinsic moral worth of humans as mere useful illusion. Third, once we are “enlightened” (i.e., once our consciousness is raised by our awareness of the truth of atheistic neo-Darwinian evolution), it reduces morality to enlightened self-interest (reciprocal altruism), which reduces to contractarian ethics (ethics by agreement).

But contractarian ethics are hugely problematic. Here are some of the problems: Nothing is really wrong except breaking an agreement (but that’s okay if you pay out); people outside the agreement (“social club”) are not morally relevant (unless they can provide tit for tat, i.e., reciprocate in some way in your favour or not in your favour); plus we end up with moral relativism (i.e., morals depend on our various “social clubs” or individual preferences, which means that obviously evil regimes and individuals are merely doing what is “right for them,” period).

4. To make matters worse for atheistic neo-Darwinian ethics, both the survival of the fittest and the co-operation emphases have trouble accounting for high altruism (i.e., the virtue of self sacrifice). High altruism is alleged by some to be due to an evolutionary misfiring.

Misfiring or not, once we realize (in our atheistic neo-Darwinian “enlightened” consciousness) that the urge to self-sacrifice is merely an evolved instinct—i.e., just a useful evolutionary illusion/trick, nothing more—we begin to wonder whether self-sacrifice is virtuous at all.

To whoever is leaving links to pornography sites (whether via some sort of virus or via a more direct method): Please don't. Thanks.