War in Ukraine, Freedom Convoy in Canada, and a silly meme 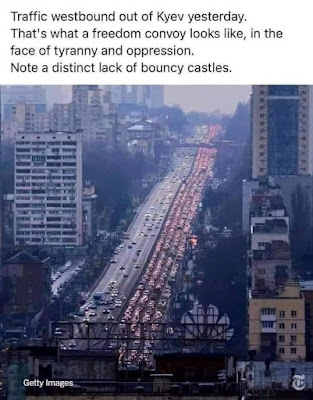 War in Ukraine, Freedom Convoy in Canada, and a silly meme

Is Canada's Freedom Convoy silly in comparison to Ukraine's exodus?

I saw a silly meme shortly after Russia invaded Ukraine and shortly after Canada’s Prime Minister invoked the Emergencies Act to shut down Canada’s Freedom Convoy. Sadly, the silliness of the meme (shared widely on social media) seemed lost on many.

The meme had a photo of hundreds of cars lined up bumper-to-bumper leaving Kyiv. The meme also had the following text: “Traffic westbound out of Kyev [sic] yesterday. That’s what a freedom convoy looks like, in the face of tyranny and oppression. Note a distinct lack of bouncy castles.”

The apparent point of the meme was to draw an analogy between Ukraine’s and Canada’s motor vehicle caravans, put emphasis on the horror of the situation in Ukraine, and thereby dismiss the importance of Canada’s Freedom Convoy.

I think that the analogy is faulty and that the importance of Canada’s Freedom Convoy remains.

Why is the analogy faulty?

Both convoys are for the sake of freedom, for sure. But the motorcade in Ukraine would be better described as a Fleeing Convoy, not a Freedom Convoy.

A better (albeit hypothetical) analogy to Canada’s Freedom Convoy would be this: the citizens of Russia taking their vehicles to the street to protest Russian President Putin before he became a tyrant.

Aleksandr Solzhenitsyn (1918-2008) provides us with a warning that we should take seriously.

Solzhenitsyn wrote The Gulag Archipelago. This book (three large volumes) is about the far flung system of Soviet forced labour camps in which millions of people perished. Solzhenitsyn describes how Soviet society succumbed to the horrors of a government bent on imprisoning and murdering its own citizens. Solzhenitsyn’s work no doubt helped bring about the fall of the Soviet Union.

These words (from chapter two of Solzhenitsyn’s first volume) should give us pause: “if people had been heroic in exercising their civil responsibilities, there would never have been any reason to write either this chapter or this whole book.”

I think Solzhenitsyn's point has to do with the importance of citizens exercising their civil responsibilities BEFORE dark forces get control, as a pre-emptive strike against the rise of tyrannical and oppressive government bent on imprisoning and murdering its own citizens.

I would add: And before requiring its own citizens to war on other countries—such as Ukraine.

Yes, fleeing westward from Kyiv is important (and understandable), and peoples with freedom should provide aid (humanitarian aid as well as ammunition).

Important, too, and perhaps even more important—so we can provide aid in the first place—is that free peoples of the world should stand up against their governments when those governments show inklings towards squelching freedom.

Canada’s Liberal government was very apparently infringing on the constitutional rights of Canadians during the COVID pandemic (see the Peterson-Peckford discussion below for evidence). Hence Canada’s Freedom Convoy—and its importance.