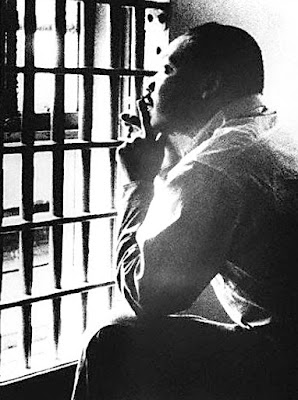 Dr. Martin Luther King Jr. (1929-1968) wrote his now-famous “Letter from Birmingham Jail” in 1963. It was a response to critics of his peaceful protests in the U.S. against racism and racial segregation. If there is a document that should be consulted about civil disobedience, MLK’s letter would be it.

Today I was re-reading MLK’s letter, hoping to get some insights into Canada’s trucker protest. Below are some snippets that stood out to me. Whether the reader supports the trucker protest or not, I think MLK’s letter can help us.

Note: I am not saying the COVID-19 mandates are analogous to the horrors of the racism that MLK faced; they aren’t. Rather, I am saying the truckers who are protesting against the injustices of COVID restrictions (I believe there are and have been real injustices) and the critics of such protests—both sides can learn from MLK’s letter. In my view: (a) truckers should heed MLK’s call to remain peaceful and act justly even in the face of vilification (as they have been, as far as I can tell) and even if the state flexes its muscles and resorts to police force (as seems imminent); and (b) persons with political power should heed MLK’s call to listen and negotiate (are you listening, Prime Minister Justin Trudeau?).

Snippets from Martin Luther King Jr.’s “Letter from Birmingham Jail” (written to fellow clergymen who had publicly expressed criticism of his work):

We know through painful experience that freedom is never voluntarily given by the oppressor; it must be demanded by the oppressed. Frankly, I have never yet engaged in a direct-action movement that was "well timed" according to the timetable of those who have not suffered unduly from the disease of segregation.

[T]here are two types of laws: there are just laws, and there are unjust laws. I would agree with St. Augustine that "An unjust law is no law at all." … Any law that degrades human personality is unjust. All segregation statutes are unjust because segregation distorts the soul and damages the personality. It gives the segregator a false sense of superiority and the segregated a false sense of inferiority.

I hope you are able to see the distinction I am trying to point out. In no sense do I advocate evading or defying the law, as would the rabid segregationist. That would lead to anarchy. One who breaks an unjust law must do so openly, lovingly, and with a willingness to accept the penalty. I submit that an individual who breaks a law that conscience tells him is unjust, and who willingly accepts the penalty of imprisonment in order to arouse the conscience of the community over its injustice, is in reality expressing the highest respect for law.

Like a boil that can never be cured so long as it is covered up but must be opened with all its ugliness to the natural medicines of air and light, injustice must be exposed, with all the tension its exposure creates, to the light of human conscience and the air of national opinion before it can be cured.

I have consistently preached that nonviolence demands that the means we use must be as pure as the ends we seek.