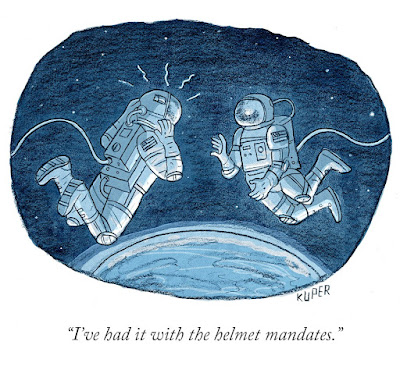 On February 4, 2022, The New Yorker presented a cartoon that smacks of vaccine mandate propaganda. The cartoon depicts two astronauts in outer space and one says, as he’s about to take off his helmet, “I’ve had it with the helmet mandates.”

But it’s a weak argument. I see (at least) three relevant dissimilarities that render the analogy deeply problematic from a logic/critical thinking point of view.

From World Health Organization: “Most people who fall sick with COVID-19 will experience mild to moderate symptoms and recover without special treatment. However, some will become seriously ill and require medical attention.”

Unlike the fact that we all need helmets to live in outer space, not all of us need vaccines. In the COVID situation some (many?) people can live without “helmets” (vaccines). Again, as stated by WHO, “Most people who fall sick with COVID-19 will experience mild to moderate symptoms and recover without special treatment.” It also turns out that some (many?) people who have had COVID, and have survived, have developed a non-vaccine-induced immunity.

Unlike helmetlessness in space, a situation in which it’s clear that helmetlessness is the culprit, it’s often not clear that in the COVID situations that COVID is the culprit. Hospitalizations due to COVID have been over-reported by up to 50%, as has been admitted recently by various medical officials (e.g., Dr. Kieran Moore, Ontario’s chief medical officer). And in recent weeks it’s become clear that health officials have failed to make a distinction between deaths with COVID and deaths because of COVID.

So, yes, wear your helmet in outer space, but on earth a thinking cap is prolly enough.

P.S.  I think the above cartoon of The New Yorker is propaganda for what some have called “vaccine-ism.” For additional thought about the new scientistic ideology called “vaccine-ism,” see Norman Doige’s “Needle Points” on Jordan B. Peterson’s podcast S4: E79. Dr. Norman Doige is a psychiatrist, psychoanalyst, and author of The Brain That Changes Itself and The Brain’s Way of Healing. He is Executive Director of Health and the Greater Good.  The podcast is a whopping 3.5 hours long. For a link to a transcript of Doige’s paper, which Doige reads on Peterson’s podcast, see here.

P.P.S. Objection: It’s only a cartoon. Reply: Only if you ignore all of the above.