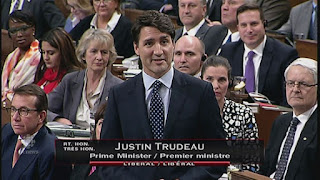 APOLOGIA
By Hendrik van der Breggen
The Carillon, May 25, 2017

The Right Honourable Justin Trudeau, Prime Minister of Canada, may one day find his recent "answers" in the House of Commons' question period listed in university textbooks on reasoning—in the sections on fallacies.

Various Conservatives and even NDP Thomas Mulcair asked the PM a simple question, and they asked this question 18 times. Only to have the PM evade it—18 times. (Some have counted 23 times, I'll stick with 18. Call me "conservative.")

Here's the question: How many times has the PM met with the ethics and conflict-of-interest commissioner (to see if there is a conflict of interest in the PM vacationing with a billionaire on the billionaire's island)?

The PM's response—18 times—was, simply and basically, this: "I am very pleased to work with the ethics and conflict-of-interest commissioner to answer any questions she may have."

This isn't a fallacy of logic in the sense that an argument—a mistaken argument—is being set out by the PM, because the PM didn't set out an argument. Nevertheless, it is a fallacious response: it is a dialogical error, i.e., the mistake of not participating properly in a reasonable dialogue by not answering the question at hand.

Such a mistake could be innocent, because perhaps the question was not understood. But in the PM's case the question was repeated not just once, not just twice, but 18 times. The PM's response was clearly deliberate. And evasive. He was knowingly avoiding the question.


Perhaps the PM couldn't provide a specific answer concerning number, for legal reasons. Why not say so?

But things get worse.

Well, I am a Canadian, and I expect that the PM should know that consistency in making a mistake is not an intellectual virtue. Giving the same mistaken answer over and over again doesn't make the answer right. No matter how consistent one is in saying 2+2=5, the fact is that 2+2 doesn't equal 5.

But things get worse yet.

Later, in the PM's ninth response, the PM uses another evasion tactic: he attempts to change the subject—a.k.a. red herring.

Here's the question (again): How many times has the PM met the ethics commissioner?

The PM answers as follows: "I'm happy to accept and work with the ethics commissioner on answering any of the questions she may have. That's the kind of thing that is important to Canadians. What's also important to Canadians is making investments in the middle class, in growth for the economy, in putting forward a budget that will put more money in the pockets of the middle class, and raise taxes for the wealthiest one percent. These are the focuses that our government has. The priorities of our government is serving the middle class and those working hard to join it."

If this were a court and I were a lawyer, I'd shout "Objection! Irrelevant!" And the judge would instruct the jury to ignore the PM's attempt to bamboozle by setting out a red herring. (The PM does this twice, in fact.)

In sum, the PM commits multiple serious mistakes that can be placed in three categories: avoiding the question (x18), two wrongs make a right (x1), and red herring (x2).

(Hendrik van der Breggen, PhD, teaches philosophy at Providence University College. The views expressed in this column do not always reflect the views of Providence.)