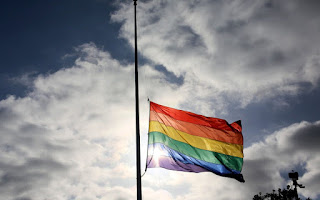 “All human life is sacred. All murder is murder. All murder is to be condemned. All victims are to be mourned. It doesn't affect the gravity of the evil—at all—that the murderer killed homosexuals in a gay nightclub.”

“Murder is to be condemned and victims are to be mourned, whether the victims are nuns in a convent, prostitutes in a bordello, children in a school, or fishermen in a boat.”

George continues: “Mateen [the Orlando shooter] was a Muslim and a Democrat. That doesn't make Muslims and Democrats guilty. Christians aren't guilty either. Mateen & IS are guilty.”

“Following the horrific attack in Orlando, people as usual have been rushing to judgment. President Obama blames lax gun laws. Donald Trump blames immigration. Neither is right. There has been comparable carnage in countries with strict gun laws. The perpetrator in this case was born in the United States. This is not primarily about guns or immigration. It is about a deeply dangerous ideology that is infiltrating American society in the guise of religion. Homophobia comes in many forms. But none is more dangerous in our time than the Islamic version.”

Hanover School District trustee (and nurse) Lynn Barkman: “HSD teachers, students and their parents know that our culture is changing, that does not suggest that we should abandon truth."

Robert Cushman, senior medical advisor at Health Canada: “HIV is much more common in the MSM [men who have sex with men] population than in the general population.”

Researcher Thomas Coy, “The risk of HIV from sexual contact for MSM (men who have sex with men) was approximately 150 times greater than the heterosexual male population in 2010.”

Coy adds, for perspective: “According to the CDC (Centers for Disease Control) the risk of lung cancer for men who smoke is 23 times greater than for men who do not smoke.”

[Canadian AIDS Treatment Information Exchange (CATIE) fact sheet “The epidemiology of HIV in gay men and other men who have sex with men”: “According to 2014 national HIV estimates [for Canada] ... MSM are 131 times more likely to get HIV than men who do not have sex with men.”]

From Miriam Grossman's You're Teaching My Child WHAT? A Physician Exposes the Lies of Sex Education and How They Harm Your Child (this book is recommended by Nicholas Cummings, a former president of the American Psychological Association):

These disparities also occur in accepting, gay-friendly societies such as The Netherlands (and elsewhere).

“Clearly, societal bias is not to blame for the disproportionately higher numbers in the homosexual populations in the Netherlands.”

Dr. Grossman concludes: “While I'm sure that for some people, societal bias contributes to their distress, the entire onus for these difficulties—emotional and physical—cannot be placed at the feet of a 'heterosexist' society. It's just not intellectually honest.”

Note to critics: Before commenting, please read my (relevant) previous work, the criticisms from my previous critics, plus my replies to my critics.  Look here, for starters: Is promoting same-sex sex wise?

For a reply to one of my more recent critics, see: Politically Incorrect Thoughts: HSD and LGBTQ ... continued