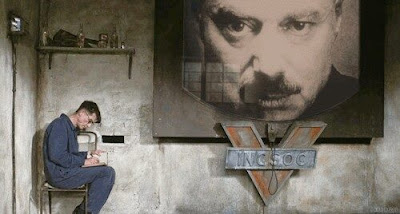 “Recent history shows us that the conscience can be so corrupted and manipulated that today's unthinkable becomes tomorrow's thinkable with remarkable speed.” – C. Everett Koop & Francis A. Schaeffer, Whatever Happened to the Human Race? (1983)

Like Winston Smith, the protagonist in George Orwell's dystopian novel 1984, I entertain politically incorrect thoughts. What follows are a few of those thoughts, some of which may soon become illegal to express. They're disconnected and perhaps disconcerting—read at your own risk.

● “Physician-assisted dying”: euphemism: not merely medical help to let terminally ill die peacefully and painlessly; includes active killing of another who requests suicide, whether terminally ill or not; positive attitudes associated with the acceptance of medical help when death runs its course are transferred (without argument) to other cases wherein doctors kill; effective in manipulating opinions of public that feels rather than thinks.

● May I suggest a new psychological disorder for the DSM (Diagnostic and Statistical Manual of Mental Disorders)? PHOBIA OF BEING LABELED PHOBIC. This is a fear of or aversion to expressing disagreement on radical public policy issues (e.g., men in women's bathrooms) because one wants always to be liked and appear “progressive” (or “on the right side of history” or “2016-ish”); in adults the dread of being called “phobic” may be so intense that paralysis results, even as children are put at risk; in democracies, fascist-leaning politicians and ideologues exploit this fear to halt critical discussion or keep it from getting started; formerly known as cowardice.

● My pipe tobacco pouch has warnings from Health Canada. According to researcher Thomas Coy, “The risk of HIV from sexual contact for MSM (men who have sex with men) was approximately 150 times greater than the heterosexual male population in 2010.” Coy adds: “According to the CDC (Centers for Disease Control) the risk of lung cancer for men who smoke is 23 times greater than for men who do not smoke.” Should Gay Pride Parades display warnings from Health Canada, too? (Further reading: Is promoting same-sex sex wise? Be sure also to read my replies to my critics.)

● According to Bill C-16, “gender identity” and “gender expression” are to become part of the Canadian Human Rights Act and Canada's Criminal Code. But Facebook, which had 58 gender identities, now has “unlimited” gender identities. So which identities and expressions should be included in the HRA and CC? What about the 52-year-old Canadian man who identifies as a 6-year-old girl?

● Ethicist and theologian Russell Moore: “John the Baptist lost his head for saying that Herod could not have his brother’s wife. Some now will be targeted as culturally unacceptable because they tell Herod he can’t BE his brother’s wife.”

"My pipe tobacco pouch...", which I assume, is similar (metaphorically) to my recent package of Colts?

Nothing lights the night, like a burning ember on a stick, or pipe (have it your way).

Nothing warms me but to hear you enjoying life, having a good smoke as the embers of opponents arguments turn to ash.

Thanks Jim. It's good to hear from you!