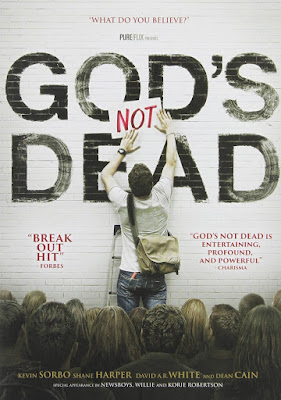 I am a Christian with three degrees in philosophy—BA, MA, PhD—so sometimes I'm asked what I think of the 2014 film God's Not Dead.

This movie is about a Christian student taking a philosophy course at a secular university with an atheist professor who requires the class to sign a sheet saying "God is dead." Spoiler alert: the student refuses and after some setbacks successfully argues that God exists.

Although there are cheesy parts, I liked the movie. I found it refreshing to hear the student actually present some good arguments for God's existence. (I confess: the student's appeal to Oxford philosopher of science John Lennox sealed the deal for me! Lennox's work in Christian apologetics and the interface between science and faith is excellent.)

The part of the film that wasn't true to life (at least my life as a philosophy student) was the professor's explicit requirement of students to declare God's non-existence to pass his course.

It isn't totally far-fetched, though. When I was an undergraduate student, my philosophy of religion professor (an atheist) began the semester saying, "I don't give a tinker's damn about God's existence!"  And he went on to present many, many strong arguments against God's existence.

Significantly, though, he allowed those (few) of us who disagreed to argue our case (but we had to work hard, probably much harder than the rest of the class). Happily, at the end of the semester this professor recommended me for graduate studies in philosophy.

I had a similar experience as a doctoral student when my ethics professor (an atheist) told students that "theological ethics is fundamentally impossible." But he gave me an A for a paper in which I argued to the contrary.

Generally my experience as a student was that philosophy professors (mostly atheists) valued good arguments.

Still, it's important to realize that God's Not Dead gets some not unrealistic traction in its professor's requirement to sign the God-is-dead sheet. How so? Because the general intellectual milieu I experienced in the study of philosophy was strongly stacked against the Christian believer.

The implicit assumption and general consensus of the intellectual milieu in secular academia was (is) that arguments favouring the Christian God and Christian ethics fail. The sustained cumulative effect of this intellectual milieu subtly served (serves) to overwhelm and push students to go with the flow and absorb/ passively accept (i.e., "sign on" to) the God-is-dead position.

Here are a few generally-assumed-to-be-true and/or strongly-argued-for theses I had to deal with as a philosophy student who wanted to remain true to the God who is revealed in Jesus:
Much more could be said. My point is that the philosophical challenges were huge, sometimes overwhelming.

Here's my advice for Christian young people who wish to study philosophy.

Study logic and critical thinking (master these, yet remain humble).

Enjoyed reading this, I really appreciate John Lennox also, and have high regards for the efforts of Alvin Plantinga. Thanks for sharing.