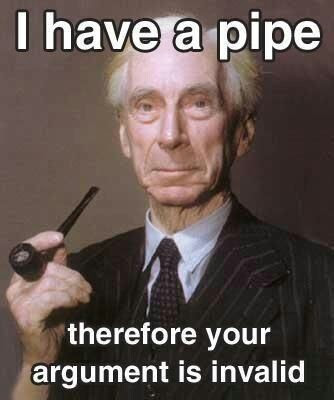 Sometimes I sit alone on our deck, quietly puffing on my pipe, and I think. What follows are some of my thoughts. They're somewhat disconnected and perhaps disconcerting—read at your own risk.

● Conflicting religions and worldviews (including the worldview that all religions and worldviews are pretty much the same, which, by the way, conflicts with all other worldviews) call for our ultimate allegiance. The careful examination of evidence and careful reasoning therefrom help us to discern truth. This is not to impose rationality onto the world; it's to do our best to let the world speak for itself.

● Christian philosopher John Bloom on religious triage: "Given that we have a limited amount of time in this life to study religions, we can dispense with those that offer us a second chance in the afterlife, or which will reincarnate us if we make a mistake in this life, or which promise us that all will be well eventually no matter how we live now. Prudence dictates that we first ought to consider the claims of those religions which say that everything depends upon the decisions made and lived in this life."

● Golden Rule: "Do to others as you would have them do to you." When said by Jesus the others include "infidels" and the rule presumes that our desires aren't defective (e.g., masochism, paedophilia, etc.).

● To claim that "judging is wrong" is to make a judgment.

● All violence is unjust? Surely not. The police officer who kills a gunman on a school shooting rampage kills justly whereas the shooter doesn't.

● Are ongoing-overly-quick-accusations of phobia a sign of a phobia against reason?

● Truth-seeking criticisms and loving others are not mutually exclusive.

● Facts and values are not mutually exclusive, either. Here I'm not thinking about valuing (a subjective though real experience that may manifest itself in behaviour); I'm thinking about actual value—real worth. Human beings in fact have real worth. Intrinsic worth. (Many atheists recognize this but have trouble explaining it. I recognize it and find it suggestive of, and explained by, imago Dei.)

● I am a centre of consciousness, i.e., a subjective being, yet I perceive objective truths (e.g., that Pythagoras's theorem is true; that if A is part of B and B is part of C then A is part of C; that Ottawa is the capital city of Canada).

● Truth without love is harsh. Love without truth is blind. Gentle humour can illuminate.