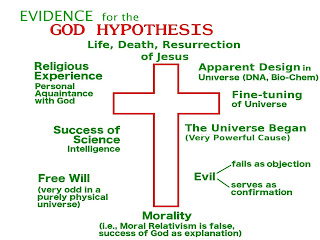 APOLOGIA
By Hendrik van der Breggen
(Note: Due to this article's length and the author's lack of time to revise, this installment of Apologia did not appear in this week's Carillon.)

For some people, the relationship between faith and reason is like oil and water—they don't mix. On this view, religious beliefs cannot and should not be subject to rational evaluation.

I disagree with this view.

To defend my disagreement, I will look at some objections to the use of reason when it comes to matters having to do with God, then I will set out some replies.

Objections to the use of reason:

Objection 1. At the core of a religious belief system are some fundamental assumptions about the world, and these cannot be tested by reason.

Objection 2. Rational inquiry is open ended: on an ongoing basis we need to consider newly turned up bits of relevant evidence, so a proof is never had, and so a reason-based decision about God must be put off indefinitely—hence reason is of no help.

Objection 3. When it comes to God, we must make a leap of faith. Faith involves risk and commitment, and faith is purely subjective—these are different from reason.

Objection 4. God is "wholly other" (utterly transcendent) and thus beyond the capacity of reason to grasp.

Replies to objections (order of replies corresponds with order of objections):

Here is a list of fundamental epistemological assumptions: that there is a world; that the world is older than five minutes; that my everyday perceptions of the world are veridical (e.g., simple seeing); that with careful investigation we can know some further truths about the world (non-exhaustively and fallibly); that some logical principles are universally valid (e.g., the principle of non-contradiction, modus ponens, modus tollens, disjunctive syllogism, etc.); that inductive reasoning is legitimate (e.g., empirical enumeration, inference to best explanation, argument by analogy); that whatever begins to exist has a cause (i.e., out of nothing nothing comes); that some moral propositions are universally true and known to be true (e.g., that torture for fun is morally wrong, that people have intrinsic worth).

Significantly, because these fundamental epistemological assumptions seem very much to be true, it follows that the fundamental assumptions at the core of a religious system might be tested indirectly against the known reality of the world.

To test a religious system, we can ask: If the core religious assumptions are true, what are the logical implications, that is, what should we expect in the world? Then we can look at the world to see if those implications/ expectations are satisfied/ confirmed.

Consider some core doctrines of Christianity (a.k.a. "mere Christianity"). If true, we should expect the following: that the world is real (not illusory); that the universe began a finite time ago (it's not eternal); that the universe is rational and generally law-abiding (i.e., the universe is a cosmos, not a chaos); that humans can know the world via investigation (albeit fallibly and non-exhaustively); that there is real moral value (the creation itself but human beings especially have real intrinsic worth); that we have free will (we are not material robots); that Jesus actually lived, died, and resurrected (in history). Confirmation of these expectations would count in favour of the view that’s under investigation, whereas disconfirmation would count against the view.

Reply 2. Yes, rational inquiry is open ended and so on an ongoing basis we should be open to newly turned up bits of relevant evidence—whether negatively or positively relevant—and, yes, an absolute "proof" is never had. However, it does not follow logically that we cannot make a decision about God. Indeed, a preponderance of evidence may make a decision in favour of belief and trust in God very reasonable. (Also, proofs are not the only basis for reasonable belief: there are also cumulative case arguments and inferences to best explanation.)

Reply 3. Yes, there is a leap of faith. However, it is surely better to make a leap of faith in the direction that the evidence points than not. Think of the religious group called Heaven's Gate. The people of this group placed their faith in a man who told them that there was a space craft behind a comet and that to board the space craft required suicide. Surely, because of the lack of good grounds in reality for these doctrines, such a leap of faith is silly. Now, if there are good grounds in reality for thinking that the universe points to God's existence, that Jesus' bodily resurrection occurred, and that He claimed to be God, then trusting Him is not silly.

To be sure, faith involves risk and commitment and subjectivity, but faith also involves intellectual content about an object: faith is a trust in something or in someone. Faith involves belief, trust, volition—and an object. In the case of the Christian faith, the object can be intellectually discerned and confirmed via reason (reason coupled with a humble heart that wills to serve God if God exists).

Reply 4. Whether God is "wholly other,” i.e., utterly transcendent, and therefore beyond the human capacity for understanding, may be true or it may be false—we have to check it out. The Christian view holds that God is knowable by humans (though not exhaustively so) because God reveals Himself in creation, in Scripture, in Christ. This, if true, can be checked out with the careful use of reason.

Reply 5. Philosopher Michael Peterson (et al.) addresses the point about idolatry as follows: "To the charge that testing one's faith by logic is placing logic above God, the retort might be that a really strong and sound faith involves the confidence that one's beliefs can pass any properly conducted test on the basis of logic and evidence." In other words, if such a faith passes, then logic and evidence are not above God; rather, logic and evidence would be servants of God.

Faith and reason don't mix? Surely they do—and should.

P.S. The use of reason in thinking about God doesn't preclude mystical/subjective experience of God. However, I submit that if a mystically or subjectively experienced spirit doesn't testify that Jesus is the God described in the Bible who has come to earth as a human being—and who was killed by crucifixion and subsequently bodily resurrected—then that spirit isn't from God. This is what my reason tells me as I try to love God with my mind (intellect) as well as my heart (will and emotion).

Acknowledgements: The above quotes and several of the above insights are from Michael Peterson, William Hasker, Bruce Reichenbach, and David Basinger's Reason and Religious Belief: An Introduction to the Philosophy of Religion, 4th edition (New York and Oxford: Oxford University Press, 2009), 58-61.

(Hendrik van der Breggen, PhD, is assistant professor of philosophy at Providence College, Otterburne, Manitoba, Canada. The views in this column do not always reflect the views of Providence.)
Posted by Hendrik van der Breggen
Email ThisBlogThis!Share to TwitterShare to FacebookShare to Pinterest
Labels: Faith and Reason, Knowledge, Logic, Truth

I need to commend the excellent formatting of this post, it reminds me of the Scholastic method, which truly was a great way of doing philosophy. Hopefully this will catch on!

I think the last objection is the most serious, not as an objection against religion, but as a temptation for Christian philosophers. Evidentialism does away first with faith, and then it does away with religion as a whole-this is the usual pattern anyway. The Liberal German theologians were very "scientific" but their science robbed Christianity of pretty much everything good about it, except humanist morality.

A man I admire, William Vallicella, is not an evidentialist, but he seems to be of the opinion that in order to do philosophy one must have an open mind and not have any dogmas (religious or otherwise). Since his vocation is that of a philosopher and not an apologist or a religious writer he seems to be forever out of the reach of dogmatic religion, in which we say "Credo" not as philosophers, but as children.

Anyway, those are some half-baked thoughts.

Thanks for your comments -- it's good to hear from you.

I've come to conclude that it's not science per se that's a problem for the "liberal" German theologians and others; the problem has to do with some faulty metaphysical assumptions that are mistakenly connected to science (e.g., metaphysical naturalism).

Yes, I guess that is what I meant to say. It is never science that is a problem for religion, just scientism.

In case anyone's interested in reading more about scientism, here are a couple of really interesting articles on this topic (okay, okay, so I'm a bit biased):

Before I offer any reflections on your latest article, could I ask you please to define what you mean by religion and religious?

I'm pretty sure that I'm not using "religion" or "religious" in any way that goes against the conventional meanings of the terms. As I mention (in reply 1), "religious belief involves fundamental assumptions about what is religiously the case (i.e., what is ultimately real and how one ought to live)."

Maybe the following working definition from Michael Peterson and co. will be helpful: "For our purposes, we assume that religion is constituted by a set of beliefs, actions, and experiences, both personal and corportate, organized around a concept of an Ultimate Reality which inspires worship or total devotion. This Ultimate Reality may be understood as a unity or plurality, personal or nonpersonal, divine or not, differing from religion to religion. Yet it seems that every cultural phenomenon that we call a religion fits this definiton. The prescribed actions vary from ritualistic patterns to ethical living; the desired emotions vary from feelings of piety and humility to a sense of optimism about life and the universe. Admittedly, it also could be argued that scientific materialism, which takes the physical realm to be the only reality, has many characteristics of religion. But we will not pursue this discussion here." (Peterson et al., Reason and Religious Belief, p. 7; italics in original.)

I hope the above is helpful.