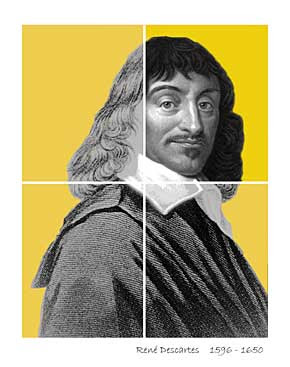 Should we be persuaded by radical skepticism? I think not.

There are at least four types of radical skepticism. Last time we looked at funky/pop skepticism. Today we will look at sensory skepticism.

Sensory skepticism tells us that we cannot know the external world because our senses deceive us. (This species of skepticism, like the dream hypothesis discussed in my previous column, is inspired by the philosopher René Descartes [1596–1650].)

To understand the force of sensory skepticism, consider the following examples. While rowing my boat, I put an oar into the water, but then the oar appears bent. While walking in the countryside, I see a flat wall on a distant farm building, but as I get closer the wall turns out to be curved. While strolling along railroad tracks, I see that the metal rails look straight and parallel to each other, but then on the horizon they appear to meet. While driving my car on a hot summer day, I see water on the road ahead, but as I continue to drive I observe that the road is dry. While volunteering as a lab rat for a psychology researcher, I see a red six of hearts as the researcher flashes a playing card, but later the researcher reveals that it was a red six of spades.

Clearly, my senses do deceive me. Therefore (or so the argument goes), my senses should not be trusted.

There are three reasonable criticisms that can be set out against radical sensory skepticism.

Second, to know that our senses sometimes deceive us requires that they sometimes or often do not. Indeed, for us to discern that I mistakenly think that the oar is bent, that the wall is flat, that the tracks do not remain parallel, that the road is wet, or that the card is a red six of hearts requires that we have clear and accurate sensory knowledge. It presupposes that we know—accurately—that the oar is in fact straight, that the wall is in fact curved, that the tracks are in fact parallel, that the road is in fact dry, that the card is in fact a red six of spades. The argument of the sensory skeptic, then, requires as legitimate and true what it purports to show is not legitimate and true. It self-refutes.

Third, because the argument for sensory skepticism very apparently fails, our senses’ prima facie veridicality—that is, their very apparent truthfulness—remains. In other words, the burden of proof belongs to those who deny the obvious, so the senses are innocent until proven guilty.

It is reasonable, therefore, to go with what our senses tell us about the world, as long as we have no overriding reason to doubt them, and as long as we are careful.

How does this relate to Christianity? Significantly, it turns out that the reports concerning Jesus' resurrection tell us that the witnesses carefully used their senses to ground their belief. According to the New Testament record, the witness testimony has do with that "which we have heard, which we have seen with our eyes, which we looked upon and have touched with our hands" (1 John 1:1). Also, this record tells us that the resurrected Jesus appeared to individuals and variously sized groups (1 Cor. 15:3-8), was seen to eat fish (Luke 24:41-43), invited physical touch (John 20:27), plus talked with the witnesses (Matthew 28:9-10, 16-20), all over a period of several weeks (Acts 1:3). The witnesses were so convinced by the proofs of the physical reality of what their senses perceived—proofs that Jesus was physically alive after His death—that they testified to the resurrected Jesus in spite of persecution and suffering.

It seems to me that if our senses were really unreliable then not only would the eyewitness accounts of Christ be called into question but the Bible's infallibility would be highly doubtful because in the passages you cited it clearly assumes that sensory observation is a reliable way to know.

This is Landon by the way.

It's good to hear from you, Landon. I like the new look of your blog.

I understand making the case that the Cartesian problem is pragmatically ignorable, but to use the bible to do so seems like sloppy math to me.

You're using your fallible knowledge of a fallible book's claims that it is infallible to somehow prop up your own sensory perceptions.

Everyone should join me in celebrating Blasphemy Day over at Untitled Vanity Project, I'll be doing Blasphemy themed posts all day long!

You wrote: "You're using your fallible knowledge of a fallible book's claims that it is infallible to somehow prop up your own sensory perceptions."

My reply: No, I am not doing what you accuse me of doing. In fact, you misrepresent my project. Please read more closely. I argue that we can know the external world via our senses, contrary to Cartesian sensory skepticism, and this allows us to take seriously reports of others concerning what they know of the external world via their senses. In other words, because I can get reliable knowledge from my sensory perceptions, I can also get reliable knowledge communicated by (credible) others regarding what they've gotten from their sensory perceptions. Contrary to what you assert, the epistemic flow is not from what the Bible claims about sensory perception to the epistemic status of my sensory perceptions. You confuse my agreement with Landon that if our senses are not reliable then the Bible isn't infallible (because it presumes that the senses are reliable), with your misrepresentation (of my position) that the Bible tells me that my sensory perceptions are accurate therefore my senses are accurate. And you accuse me of doing "sloppy math"?!

The fact of the matter is that you commit the Straw Man Fallacy. The Straw Man Fallacy is the mistake in reasoning which occurs when a person criticizes a weak position that an author did not really hold and then concludes—on the basis of the criticized misrepresentation—that the author’s real position is logically flawed. (For more on this fallacy, look here.)

So, contrary to what you say I'm doing, I am not falling into "the same trap Descartes fell into when 'he proved the existence of God.'" (By the way, I'm not so sure that Descartes' "trap" is actually as it's usually portrayed, but that's an issue for another day.)

You wrote: "Everyone should join me [Rhaco] in celebrating Blasphemy Day over at Untitled Vanity Project, I'll be doing Blasphemy themed posts all day long!"

My reply: I have taken a look at some of your posts celebrating "Blasphemy Day." Clearly, much of what is in your posts is rude and immature, as well as very unfair to those people who are being mocked (including people such as myself, my wife, my family, my friends, my colleagues, my students, etc.). Rhaco, you have the freedom to celebrate blasphemy if you wish. However, please know that I am trying to take God seriously in my moral and intellectual life, which includes this blog, plus I am trying to encourage good manners and decency in the world, which also includes this blog plus comments and links left on it. Therefore, because you blaspheme God and general decency (especially in your blog's Blasphemy Day posts), and because you blaspheme reasonable dialogue (as seen in your comment above; i.e., you commit the Straw Man Fallacy)—that is, because you treat neither the topics of my blog nor me, my loved ones, and my work in a respectful and reasonable manner—I hereby ban you from my blog.

What do you make of Michael Behe's son becoming an atheist? And what do you think of Behe Sr.'s decision to keep his son apart from the rest of the family in the basement?

I know that parents and children can disagree about worldview matters -- it's nothing new. My parents and brothers and sisters and I were quite spread out in this area: some are/were Christian, Jehovah's Witness, Bahai, New Age, agnostic, atheist (for a long time I tended toward the agnostic/ atheist camp, though I would sometimes pray). Also, I recall that a few years ago the children of some famous atheists became Christians (I'm thinking of atheist Madelyn Murray O'Hare and her son William Murray, for example). Also, I know young people whose parents are Muslim, but the young people became Christian. Etc. Again, it's nothing new. It's called life.

Of course, it's sad if love is lost. Happily, this isn't and wasn't the case in my family, even though we've had a few arguments ("arguments" in the good sense of reasoned discussions, not quarrels).

To make an informed comment about Michael Behe keeping his son in the basement to keep the boy apart from the rest of the family, I would need more information. If the son is an adult, then -- whether the son is an atheist or Christian or whatever -- the kid should probably be kicked out of the house! If the son is a ten-year-old, then isolating him in the basement would be pretty weird, surely. If the son is an older teen who is simply going through some time of being an obnoxious jerk, then (again regardless of whether he is an atheist or Christian or whatever) maybe the basement isn't a such bad idea. Again, more information is needed. The fact of a strained relationship between a child and his parents is sad, and I hope that the Behe family can work things out amicably.