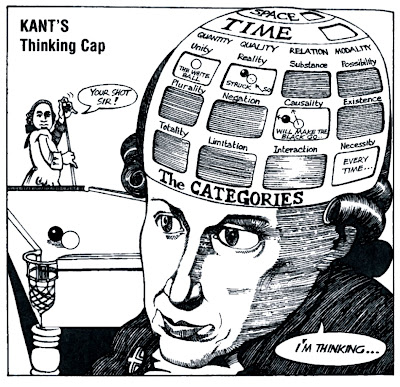 The above diagram is from Philosophy for Beginners, by Richard Osborne, illustrated by Ralph Edney (New York: Writers and Readers Publishing, 1992), p. 104.

Kantian skepticism is inspired by the epistemology (theory of knowledge) of the German philosopher Immanuel Kant (1724-1804).

According to Kant, all our knowledge begins with sensory experience, but the human mind, via its conditioners of sense-experience and its categories of thought, makes a significant contribution to this knowledge. In fact, these conditioners and categories determine for us what we can experience, and they shape this experience. Using Kant’s terminology, all we can perceive is phenomena (what our mind has conditioned and categorized), not noumena (the things themselves).

In effect, our mental conditioners and categories are like rose-tinted glasses. The glasses project pink onto all we see. Similarly, our mental conditioners project space and time onto our experience. Also, via our mind’s category of, say, causality, we project causation onto the events we experience. We project cause onto, say, a pool cue hitting a pool ball, and thereby we “know” that the cue “causes” the ball’s movement. Also, via the mind’s category of substance, we project the notion of material stuff onto what appears to be, say, a brick. We do the same with various other mental categories, such as existence. (According to Kant, there are twelve such categories.)

Better yet, think of our mental conditioners and categories as a meat-grinder/sausage-making machine. The phenomena of experience would be constituted by the ground meat (meat which ultimately is noumenal); what we know—i.e., the phenomena, which are the products of the shaping of the conditioners and categories—would be the sausages; the noumena, what is real, would be (besides the meat that’s been shaped into sausages and is only known as sausages) the stuff that does not fit into the grinder (e.g., the table, meat cutting tools, the butcher, bicycles, suspension bridges, etc.). So, according to this Kantian view of knowledge, no matter how much we grind, we cannot know the external world.

Should we be persuaded by the Kantian version of radical skepticism? I think not, for four reasons.

Second, as philosopher Jim Leffel astutely observes: “The success of scientific technology is a strong argument that our perceptions of the world are relatively accurate.” Think of sending rockets to the moon, genetic testing for cancer, laser eye surgery, and the like. Leffel adds: “We couldn’t do these things without an essentially reliable correspondence between our ideas of reality and reality itself.”

Fourth, Kant’s theory of knowledge faces some other deep problems. The categories of the understanding are supposed to apply to phenomena, not noumena. However, the category of causation is applied to noumena (as the cause of the phenomena). Also, the category of existence is applied to noumena too (noumena is said to exist). And so on. In other words, Kant’s view is contradictory in some of its crucial tenets.

Thus, it’s reasonable not to succumb to radical Kant-inspired skepticism. We can know the external world, albeit fallibly and non-exhaustively. Significantly, this opens the door to knowledge of God based on the evidence that the world provides.