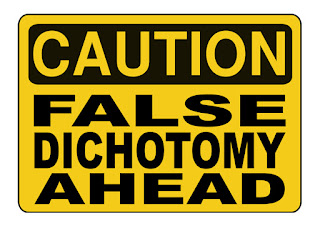 Sometimes there are only two alternatives, but sometimes not.

The false dichotomy fallacy (a.k.a. false alternatives fallacy) is a mistake in reasoning which occurs when we assume that there are only two options, when there are actually three (or more), yet we go on to assume that one of the two options must be the way to go.

Let’s say I tell you everything is either black or white. This is a false dichotomy. Why? Because the truth is that there are shades of grey (apparently at least 50!) as well as shades of red, orange, green, etc.

The false dichotomy fallacy is prevalent in much of today's public discourse.

Here are some examples I've noticed in newspapers, Facebook, etc.

Either you affirm LGBTQ ideology or you are homo/ transphobic, so you should affirm LGBTQ ideology.  Missing third option: be genuinely hospitable and respectful to those who identify as LGBTQ (etc.) AND hold to the wisdom of reserving sex between one man and one woman in permanent monogamous marriage.

Added bonus: security of vulnerable persons is protected and promoted.

Either you bring an unwanted child into the world or you should abort the child, so support abortion choice. Missing third option: instead of supporting the choice to kill the baby, help mothers in their pregnancy plus find people who will adopt and care for the “unwanted” child.

Added bonus: we create a culture in which social problems require social solutions, not killing.

Either use In Vitro Fertilization's leftover frozen human embryos (human beings) for research (which kills them) or throw them out with the garbage (which also kills them), so use them for research instead of wasting them. Missing third option: let the embryos be adopted and implanted by parents who want them. Yes, there is an adoption agency for this!

(For further thought: maybe we shouldn't even make human beings in a Petri dish in the first place, since successful IVF usually requires the making and probable destruction of “leftovers.”)

Added bonus: this helps us avoid self-delusions or delusions by other deceiving spirits.

False dichotomies—don't be deceived by them!