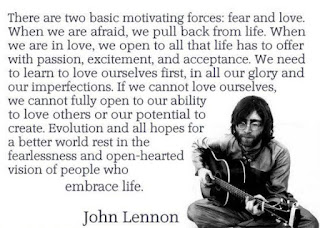 
The internet (especially Facebook) is full of philosophical quips that seem impressive, persuade many, but deserve critical attention.


"There are two basic motivating forces: fear and love. When we are afraid, we pull back from life. When we are in love, we open to all that life has to offer with passion, excitement, and acceptance. We need to learn to love ourselves first, in all our glory and our imperfections. If we cannot love ourselves, we cannot fully open to our ability to love others or our potential to create. Evolution and all hopes for a better world rest in the fearlessness of open-hearted vision of people who embrace life."


I am not a musician, nor am I a music critic, so I won't speak of John's music other than to say there is often real beauty there. But I have studied philosophy, so when a famous musician sets out a philosophical remark, I think about what is said.


Here are my thoughts.


However, I think the ex-Beatle stumbles when he says we should love ourselves first.


According to Jesus, then—and contrary to what John would have us believe—we should not love ourselves first; rather, we should love God first.


Yes, I'm a fan of much of John Lennon's music and, along with millions of others, I was deeply saddened when John was murdered. But I think it’s wise to go with Jesus and his understanding of what's most important. Why? For two reasons.


First, I think Jesus' view makes good sense from the point of view of reason and philosophy. Love for God, i.e., love aimed at the Being who is the ultimately True, Good, and Beautiful, requires an ordered love, a just love—a love that puts the ultimately True, Good, and Beautiful first and thereby structures and informs our love for others and self. This is reasonable, surely.


Second, though both John Lennon and Jesus Christ were murdered, it turns out that, unlike the case with John's death, there are good reasons for thinking that Jesus didn't stay dead after he was killed.


Significantly, the historical evidence of Jesus' life, death, and physical resurrection provides us with good grounds (a sign) for thinking that Jesus is who he claimed to be: God.


In Jesus, the God of the universe became a human being to give us a glimpse of true Love.


P.S. For a look at some of the evidence for Jesus' life, death, and resurrection, see William Lane Craig's books On Guard (2010) and Reasonable Faith, 3rd edition (2008). See too some of my relevant Apologia columns.