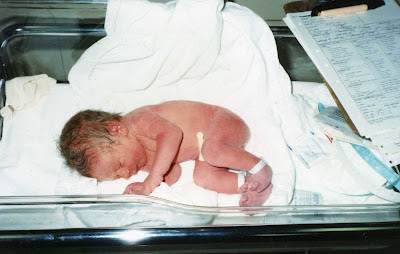 Carla's and my son Brahm shortly after his birth. According to Canadian law, our son wasn't a human being before his birth.
APOLOGIA
By Hendrik van der Breggen
(The Carillon, May 10, 2012)

Tory MP (Kitchener Centre) Stephen Woodworth has filed motion M-312 requesting that our government form a special committee to study Canada’s Criminal Code definition of the term "human being." From the point of view of informed critical thinking, I believe that Mr. Woodworth's request is most appropriate.

Presently, section 223 (1) of Canada’s Criminal Code states the following: “A child becomes a human being…when it has completely proceeded, in a living state, from the body of its mother, whether or not (a) it has breathed; (b) it has an independent circulation; or (c) the navel string is severed.”

Consider the following facts and reasoning:

1. At conception the human sperm unites with the human egg, thereby generating the existence of an embryo, which is a new life form.

2. This new life form is no longer a sperm life form nor is it an egg life form: it is something substantively different, i.e., a different substance/being, a different living entity—it's a new, genetically distinct, self-governing dynamic organism.

4. The new life form contains all the essential biological material (outside of nourishment needs) and all the genetic information required for complete tissue and organ development as well as maturation.

5. With nourishment, time, and protection, the new life form at conception grows into the fetus. (“Fetus” is Latin for unborn offspring or young one.) The fetus is but a chronological-developmental extension of the embryo.

6. At about 22 days after conception, a heart begins to beat.

7. Within about 6-8 weeks, brain waves are detectable.

8. Changes after the 10th week are primarily changes in size.

9. With continued nourishment and protection, at about 9 months the fetus, or unborn infant, becomes the born infant.

Therefore, contrary to what section 223 (1) of Canada's Criminal Code says, when a child proceeds from the body of its mother, it does not become a human being. Why not? Because it already is a human being!

Surely, in the name of truth and reason—and in the name of humanity’s most vulnerable—we should support MP Stephen Woodworth’s request that our government form a special committee to study Canada’s Criminal Code definition of human being.

Surely, too, Canada’s law should include all human beings in its definition of human being.

Note: For my additional columns on abortion, please check the archives.

Robert George, Professor of Jurisprudence, Princeton University, on the sanctity of human life: "The issue is so foundational, it has to be given priority. There are many other concerns: there is the environment, there is the economy, there is the defence of the nation. No one would treat those as anything other than urgent concerns, because they are. They are very important concerns.... But even more fundamental, and therefore entitled to an even greater priority, is the protection of innocent human life." (Doing the Right Thing, Simulcast DVD, The Colson Center, September 24, 2011.)

P.S. For some discussion concerning motion M-312, see the comments below the CBC News article.