The Dalai Lama, moral truth, and the need for careful thinking 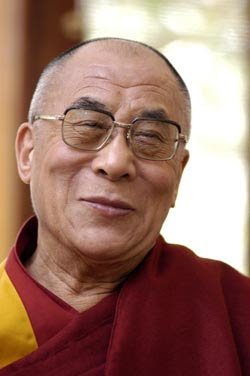 The Dalai Lama, moral truth, and the need for careful thinking

"Because of the great differences in our ways of thinking, it is inevitable that we have different religions and faiths. Each has its own beauty. And it is much better that we live together on the basis of mutual respect and mutual admiration." ~ Dalai Lama (June 13, 2011)

The Dalai Lama is a leading voice of Buddhism today and is revered by many. Christians and people of other faiths would do well to realize that although the Dalai Lama does not claim to be God (as Jesus claimed), when the Dalai Lama speaks truth, his claims should be heeded. After all, all truth is God's truth.

Qualification 1. I agree that we should live together on the basis of mutual respect and admiration. But, I would add, this is because human beings have real moral worth. Moreover, I would add, a religion or philosophy is needed to provide a foundation for, i.e., make sense of, such worth. Otherwise the perceived worth may be undermined by a religion or philosophy that rejects rather than reinforces the reality of such worth.

Qualification 2. I agree with the Dalai Lama that there are "great differences in our ways of thinking." But, and following closely on the heels of my last point, I would add that we should keep in mind that some ways of thinking are less sensitive to truth and careful reasoning than others—and thus threaten the Dalai Lama's moral thesis that it's better to live together with mutual respect and admiration.

For example, consider Friedrich Nietzsche's ideal human, the atheistic "superman" who is superior to the rest of humanity, a.k.a. the "herd," which is expendable. Or consider Hinduism and its Dalit class, whose members are "untouchable" and alleged to be inferior. These ways of thinking reject the equal moral worth—i.e., mutual respect and admiration—of human beings.

Or consider Islam. Some segments of Islam see women as second rate humans, unfit even to drive automobiles. Again mutual respect and admiration are rejected.

Or consider the "new atheism" of Oxford University professor Richard Dawkins. This view denies objective moral value and understands our moral sense as merely a useful, evolutionary aid to survival. As a result, mutual respect and admiration become ungrounded, especially when they're no longer useful to those in power or, say, when one tribe thinks its survival is more important than the tribe down the road.

Or consider Hinduism (again) or extreme postmodernism. These views deny knowledge of the actual world external to our minds—which includes knowledge of the reality of our neighbor as well as his/her moral worth. Again, kiss mutual respect and admiration good-bye.

So, yes, there are different ways of thinking. But, it should be acknowledged, some ways of thinking end up rejecting the Dalai Lama's moral thesis that it's better to live together with mutual respect and admiration.

Qualification 3. I agree with the Dalai Lama that the world's different religions and faiths have their own beauty. But, I would add, some religions and faiths have less beauty than others. Think of Jonestown and Heaven's Gate, which resulted in mass suicides. Or think of the ancient Aztec/ Mayan religion, which involved human sacrifice (the horror of which we glimpse in Mel Gibson's film Apocalypto).

What's my point in setting out these agreements and then adding the qualifications? It's this: Even though I say "Amen!" to much that the Dalai Lama says (above), the fact remains that, philosophically, to justify the Dalai Lama's moral thesis that we should live together on the basis of mutual respect and admiration requires (at least) a well reasoned refutation of those religious and philosophical views that, if true, would reject actual human worth as illusory or false.

It's not enough for the Dalai Lama to dismiss competing views merely by saying that (a) those views have their own beauty and (b) they're "inevitable" because of our different "ways of thinking" (the differences of which the Dalai Lama elsewhere attributes to human bias).

All ways of thinking—including the Dalai Lama's—should be investigated on a case by case basis, via careful reasoning and careful examination of evidence, so we can determine which are closer to truth (and less biased). Otherwise, the Dalai Lama's position is just one more inevitable and different (biased) way of thinking. It may have its own beauty perhaps, but no evidence or reasons for thinking that it, rather than its competitors, is truly the way to go.

I want to develop one of your thoughts in some of my own teaching -- the effect on ethics of underlying philosophical positions. For example, I have been reading about the thological positions we call Calvinism and Wesleyan-Arminian. You can look for somethign called the great debate on youtube, adding "jerry walls" (who was a philosophy prof at Asbury at the time). My further question is "What difference does it make?" That is, what is the connection between such philosophical-theological positions and ethics? Thank you for stimulating my thinking.

Thanks for letting me know about your plan to develop one of my thoughts, and thanks for the information on how to find the YouTube debate you mention – I'll have a look when time permits.

You raise questions concerning the effect on ethics of underlying philosophical-theological positions. Here's my attempt at an answer.

I hope that the above is helpful. For more on this topic, see my Apologia column "Atheistic Darwinian Evolution and Ethics" plus comments (March 12, 2010).