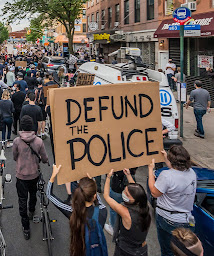 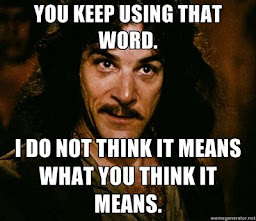 These days we often hear and see the slogan “Defund the Police.” I would like to draw our attention to the word “defund.” And I would encourage the sloganeers to heed the words of the famous swordsman Inigo Montoya (from the wonderful film The Princess Bride): “You keep using that word. I do not think it means what you think it means.”

My friend and former colleague Tim Perry, PhD, adds refreshing clarity: “Now that I know that ‘Defund the Police’ means ‘Stop treating every social problem as a police problem,’ I'm all for it. Just don't understand why the people who pick slogans picked this one. Because what it says is not what they tell me they mean.”

To back up Dr. Perry’s observation on “what it says,” consider the following dictionary definitions of “defund”:

Also, consider why (besides the above lexicons' definitions of “defund”) many English-language users might take “Defund the Police” to mean what the dictionaries say it means, i.e., to stop funding the police:

Also, consider why many reasonable people are legitimately concerned about defunding the police (when the word “defund” is understood in its normal lexical usage as canceling/ withdrawing financial support). That is, consider these observations from Steven Pinker, PhD, Professor of Psychology at Harvard University:

When law enforcement vanishes, all manner of violence breaks out: looting, settling old scores, ethnic cleansing, and petty warfare among gangs, warlords and mafias. This was obvious in the remnants of Yugoslavia, the Soviet Union, and parts of Africa in the 1990s, but can also happen in countries with a long tradition of civility. As a young teenager in proudly peaceable Canada during the romantic 1960s, I was a true believer in Bakunin’s anarchism. I laughed off my parents’ argument that if the government ever laid down its arms all hell would break loose. Our competing predictions were put to the test at 8:00 A.M. on October 17, 1969, when the Montreal police went on strike. By 11:20 A.M. the first bank was robbed. By noon most downtown stores had closed because of looting. Within a few more hours, taxi drivers burned down the garage of a limousine service that had competed with them for airport customers, a rooftop sniper killed a provincial police officer, rioters broke into several hotels and restaurants, and a doctor slew a burglar in his suburban home. By the end of the day, six banks had been robbed, a hundred shops had been looted, twelve fires had been set, forty carloads of storefront glass had been broken, and three million dollars in property damage had been inflicted, before city authorities had to call in the army and, of course, the Mounties to restore order. This decisive empirical test left my politics in tatters (and offered a foretaste of life as a scientist).

Happily, there is some calm in the sloganeering storm. Enter: Calgary Chief of Police Mark Neufeld. Here is a portion of a news report “Defund the Calgary police: Need to define it first, says chief”:

In a meeting earlier this week with media, Calgary’s Chief Constable Mark Neufeld said everyone has a different idea of what defunding police means.

“I think we’re talking about defunding the police before we define what we want them to do, and what we don’t want them to do and perhaps exploring legitimate options for addressing the demand in a practical and effective way.”

Permit me to close with a heavily embellished paraphrase of our earlier quote from the famous swordsman Inigo Montoya: Protesters keep using the slogan “Defund the Police,” but I don’t think the slogan means what many protesters claim it means—and I’m deeply troubled and even suspicious that those protesters continue to use the slogan because there are also many protesters who do think it means what it clearly says it means.