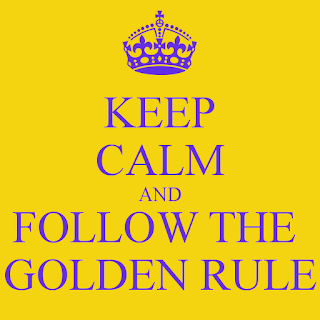 Jesus famously set out the Golden Rule as follows: "Do to others what you would have them do to you, for this sums up the Law and Prophets" (Matthew 7:12).

We Westerners tend to take the Golden Rule for granted. Philosophically, though, the rule deserves close examination. Let's look at three positive points, an important assumption, plus a problem.

First positive point: Jesus said it. Because Jesus is God come to earth as a human being, the Golden Rule is hugely important, full stop.

Second positive point: the Golden Rule is hugely important for doing ethics. To know that what you want for yourself is what others want for themselves too, and thus what you ought to do, is important moral knowledge.

As important as these positive points are, there's also an assumption that should be examined, especially if we are looking at Jesus' statement of the Golden Rule. (I think this assumption is a positive, too, but I'll let the reader decide.)

What's the assumption behind Jesus' Golden Rule? The assumption can be discerned from Jesus' context, i.e., the worldview Jesus holds.

(If I understand Muhammad and the Qur'an correctly, Muhammad's positive version of the Golden Rule applies only to those who are Muslim.)

Moreover, Jesus' worldview holds that "others" include especially "the least of these." The least of these are human beings made in the image of God yet who are hungry, thirsty, lonely, unclothed, ill, or imprisoned—i.e., the poor and needy.

Today, the poor and needy include orphans, the disabled, the abused, the unborn, the struggling single parent, the elderly, the sick, the starving, the enslaved and trafficked, the refugee, tsunami victims, the persecuted, the homeless, the lonely, the depressed, the sexually abused and confused—the list is long.

In other words, the context of Jesus' espousal of the Golden Rule presupposes the view that because people reflect the Imago Dei, people—all people—have real and great moral worth, and equally so. This underwrites universal human rights.

The Golden Rule prescribes consistency between my desires for myself and my actions toward others. So far, so good. But, as I tend to forget, my desires could be defective.

The truth is that my desires often are defective. I could be a masochist, i.e., a person who likes being abused physically. So for me to do to others what I want them to do to me puts a stamp of approval on my self-abuse and abuse of others.

Or I could want others to kill me. So I should kill others.

The reality of defective desires shows that Jesus' understanding of the Golden Rule presupposes a moral framework—i.e., the moral law which the Golden Rule summarizes—to govern my desires. (Jesus also intensifies the moral law when He tells us not only not to commit adultery or murder but also not even to indulge in thoughts about such things.)

To love self and others truly, then, we need God's grace to transform our desires into holy desires.

Enter the Good News: by accepting Jesus as Lord we can be transformed by the Holy Spirit.