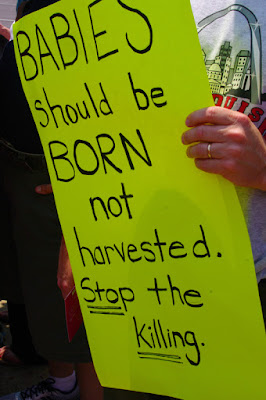 With the recently publicized horrors of human fetuses/babies being torn apart and their body parts sold by Planned Parenthood (a major abortion provider in the U.S.), it's reasonable to think that Canada should introduce law to protect unborn children.

Presently, abortion in Canada is legal right up to birth. Most abortions occur much earlier, and most doctors don't do late-term abortions. Nevertheless, a law would be appropriate to protect at least those children in their, say, twentieth week who risk an unjust death by abortion because their body parts may be in demand.

In Canada such a law could save hundreds of lives, probably thousands, yearly.

Still, some say abortion legislation is misguided: we should instead deal with the underlying causes that drive women to abortion. A pregnant woman may be facing psychological problems, so that should be our focus.

In reply, we should keep in mind that abortion kills an unborn child—a human being. That's hugely significant.

Also, we should consider Scott Klusendorf's insightful critique of the focus-on-the-underlying-causes argument:

"[T]his is like saying that the 'underlying cause' of spousal abuse is psychological; so instead of making it illegal for husbands to beat their wives, the solution is to provide counseling for men."

Klusendorf adds: "There are 'underlying causes' for rape, murder, theft, and so on, but that in no way makes it 'misguided' to have laws banning such actions."

But doesn't Canada's Criminal Code tell us the unborn are human beings only after they are born? Yes, but our law is mistaken.

At this juncture, one might grant that the unborn child is in fact a human being, yet object that it isn't a "person." That is, the unborn human being lacks some specific developmental feature which confers the right to life.

However, this approach to personhood is problematic. The allegedly decisive features fail because they weaken the personhood of many human beings who clearly already have the right to life.

For example, if self-awareness and rationality are the crucial criteria of personhood, then the right to life of newborn infants as well as sleeping, stunned, or mentally disabled persons is jeopardized. As a result, the equality in equal rights gets ungrounded.

At this juncture, one might object that difficulty in policing and enforcing abortion law would render it useless. In reply, we should note that it is difficult to police and enforce laws against, say, texting and driving, but the law works to discourage texting and driving. The point: if an action kills or threatens to injure innocent others, a law against the action is not unreasonable, even if not 100% effective.

Folks, most abortions are due to social problems (abortions for the horrific circumstances of rape, incest, or when a mother's life is threatened account for a small percentage only). Surely, social problems require social solutions—not the killing of children.

We need an abortion law.