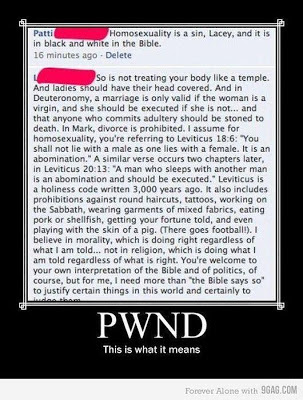 On the Internet there is a popular poster with the following caption at the bottom: "PWND: This is what it means." ("PWND" is internet language for owned, dominated, annihilated, or outclassed.) Above the caption is a mock Facebook discussion about the Bible and homosexuality between two persons, Patti and Lacey.

Patti's “biblical” position is PWND—owned, dominated, annihilated, and outclassed—by Lacey's superior argument. Therefore, or so the poster would have us believe, the Bible's view on same-sex relationships should be dismissed.

Patti: "Homosexuality is a sin, Lacey, and it is in black and white in the Bible."

Lacey: "So is not treating your body like a temple. And ladies should have their head covered. And in Deuteronomy, a marriage is only valid if the woman is a virgin, and she should be executed if she is not. And anyone who commits adultery should be stoned to death. In Mark, divorce is prohibited."

Lacey continues: "I assume for homosexuality, you're referring to Leviticus 18:6: 'You shall not lie with a male as one lies with a female. It is an abomination.' A similar verse occurs two chapters later, in Leviticus 20:13: 'A man who sleeps with another man is an abomination and should be executed.'"

Lacey continues: "Leviticus is a holiness code written 3,000 years ago. It also includes prohibitions against round haircuts, tattoos, working on the Sabbath, wearing garments of mixed fabrics, eating pork or shellfish, getting your fortune told, and even playing with the skin of a pig. (There goes football!)"

Lacey concludes: "You're welcome to your own interpretation of the Bible and of politics, of course, but for me, I need more than 'the Bible says so' to justify certain things in this world and certainly to judge them."

Thus, or so the caption at the bottom of the Internet poster tells us: PWND—this is what it means. That is to say, Patti’s biblical position has been owned, dominated, annihilated, and outclassed by Lacey’s superior argument.

Here is my challenge to Lacey.

I wonder if instead of PWND (i.e., owned/ dominated/ annihilated/ outclassed) a more accurate description of Lacey's response is that she muddies the waters.

However, as is not noted by Lacey (but should be noted), there are two dimensions to this code: an ethical-moral dimension and a ritual-ceremonial dimension—i.e., moral law and ceremonial law.

Significantly, the ceremonial law was abolished with Christ's sacrifice, but the moral law wasn't.

Significantly, the moral law included universal proscriptions against murder, theft, and sexual infractions (infractions such as adultery, incest, same-sex intercourse, human-animal sex), whereas the ceremonial law included the ritual cleanliness rules pertinent only to ancient Israel’s proper method of worship (rules such as washing after touching a dead body, not eating pork or shellfish, not engaging in sex during the menstrual period, etc.).

Of course, much more should be argued here. But my point is a modest one: Lacey blurs the distinction between moral law and ceremonial law, thereby causing confusion—i.e., she muddies the waters.

Further muddying of the waters occurs with Lacey's bit about stoning anyone who commits adultery.

Here Lacey ignores the New Testament account of Jesus stopping the stoning of an adulteress, telling the adulteress that she is no longer condemned yet she should leave her life of sin. The point (clearly missed by Lacey) is this: Adultery is still sin, but the penalty of death is removed.

More can be said about Lacey's misunderstanding of the Bible vis-à-vis divorce, head coverings, etc., but space does not permit.

Here is my challenge to Patti.

According to the Bible, what constitutes sexual sin is any sexual activity outside of the good, God-ordained confines of the monogamous heterosexual marriage bond (i.e., sexual activities such as adultery, premarital sex, incest, same-sex intercourse, bestiality).

In other words, same-sex sexual behavior is morally condemned, not same-sex attractions or orientation.

I would want to make some qualifications. Surely, if a religion tells its adherents to do X even if X is wrong, then that religion is problematic. But if the religion agrees with Lacey's sentence by encouraging its adherents to seek and live in accordance with whatever is true, excellent, noble, praiseworthy and good, then that would be a better religion. See Philippians 4:8.

Clearly, Patti's view is not PWND by Lacey's argument. Clearly, too, Patti’s alleged biblical view is very apparently not biblical.

P.S. For further inquiry into the topic of the Bible and homosexuality, please see/read the following:

EXCELLENT analysis! Starts off a bit slow, but the content is solid.

The whole argument is a bit of a red herring, too, when you think about it. The Levitical Codes state that homosexuals be killed, and like the rest of the code, no Christians are trying to enforce it, so attacking Christians for not uniformly supporting the Levitical code is completely off target.

In reality, Christian opposition to homosexuality is based on passages in the New Testament, such as the many direct warnings that the sexually immoral will not achieve the Kingdom. Also, Jesus's direct definition of marriage.

For a more entertaining version of the "PWND" argument, see the extremely popular 4-minute video from the television series The West Wing. (Thanks to my old friend Tyler Flatt for pointing this out!)

For a helpful debunking of the argument set out in The West Wing scene, listen to philosopher William Lane Craig's 15-minute podcast.

After you listen to Craig's critique, here are some insights to ponder from Tyler Flatt (from Facebook, repeated here with Tyler's permission): "I think it [The West Wing argument] relies on two things, in lieu of a genuine attempt to understand the texts in question: the rhetorical effect of appearing to 'turn the tables' (ah ha! you didn't expect me to know about YOUR holy book, did you?) and 'badgering the witness' (here's a complicated detail, and then ANOTHER, and then ANOTHER, to create an impression of truth based on sheer volume)."

Take-home lesson: When watching TV never let the crunching sound of your potato chips keep the mind from thinking carefully.

Yet another version of the arguments found in the PWND meme and in The West Wing episode is found in the flowchart meme, "So you still think homosexuality is sinful?" The chart and its debunking can be found over at the Philosophy Foosball blog post titled "Meme Analysis".

P.S. Thanks for your comments, Justin. For more about Jesus' views on homosexual sex, see the comment section over at the Philosophy Foosball blog.

“Debunking,” it seems to me, has not occurred. To that end, I’m somewhat surprised by the inclusion of the word (although perhaps it can be attributed to the Carillon).

If I were to summarize the conversation motivating your post, I would say that while one argues that homosexuality is a sin *because* the Bible says so, the other identifies her need for something more than ‘the Bible says so.’

Having read this post several times, I think Lacey is still owed a response. The attempt to wash the mud from her reading of specific texts avoids her more significant concern surrounding the contemporary impact of such texts.

I have read Gagnon, and I agree with him (to the extent that I think he persuasively argues) that someone like Paul does not simply disapprove certain types of homosexual activity, but that he disapproves of every form known to him. I as strongly agree with others, someone like Wink for example, who argues that precisely what effect that judgment should have on contemporary evaluations of homosexual activity lies outside the competence of a biblical scholar.

My own context, as a Catholic, is motivated by paragraph 11 of the Second Vatican Council’s “Dei Verbum” (wherein inerrancy encompasses that which God “wished to be recorded” for “the sake of our salvation”), and thus I am challenged by a biblical scholar from my own tradition, Raymond Brown, who observes that the task of an exegete is to discern beyond what errant authors wish to communicate, towards what God communicates for salvation.

Am I wrong in suggesting that it is a response to these words which would address the concerns Lacey raises about the presupposition of Patti.

Here’s a more accurate summary of the conversation (in the PWND poster) that’s motivating my post:

1. Patti argues that homosexuality is a sin because the Bible says so.
2. Then (a) Lacey argues that the Bible is clearly confused on this issue and so (b) the Bible should be dismissed (there’s an attempt at a kind of reductio ad absurdum argument going on here); plus (c) Lacey says that religion tells people what to do regardless of what is right, so (d) in view of Lacey’s point c plus Lacey’s points a & b, Lacey will skip religion and the Bible and instead go with secular morality.

Yes, Lacey is challenging the presupposition that because the Bible says something it must be so. But the main thrust of her challenge rests on the argumentation in the poster, which turns out to be mistaken argumentation, as my column shows.

To be sure, many people such as Lacey don’t take the Bible or religion as authoritative on moral matters. Nevertheless, the issue at hand (in the PWND poster), to which I am drawing attention, is that what the Bible says is being clearly misrepresented (by Patti) and confused (by Lacey) and then the misrepresentation and the confusion are used (by the poster's author) to dismiss what the Bible has to say. This is what my article is about. The misrepresentation and the confusion, which purport to be good argumentation, are what I’m debunking.

Yes, Lacey “can be read to want” more than what the Bible or religion says. Lacey has given us her reasons for wanting nothing to do with the Bible or religion, so she wants secular moral arguments. Okay, fine. Still, it’s legitimate to point out that her religious critique—i.e., Lacey's alleged case of having PWND Patti’s argument, by which Lacey dismisses the Bible—is a flop. From the point of view of logic and critical thinking, then, the caption at the bottom of the Internet poster should be more appropriately stated thus: "PWND: This is NOT what it means."

For a step toward some secular moral arguments that at least challenge the wisdom of same-sex sex, see my “Is being gay like race?”