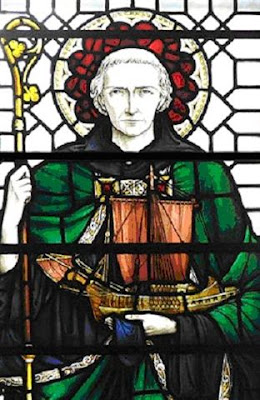 
On Faith Seeking Understanding
Anselm of Canterbury (1033-1109) is famous for the motto “faith seeking understanding.” It may be tempting to take this motto as a criticism of Christian apologetics, i.e., that to become a Christian one should first take a leap of faith blindly—i.e., without evidence or reason as a guide—and only subsequently come, via reason, to an understanding of the faith from within the faith position or paradigm. Interestingly, this faith-first-reason-later criticism of Christian apologetics seems not to be what Anselm had in mind.

(Caveat: In what follows I will defend an understanding of Anselm, which, although there isn’t a complete scholarly consensus on this, seems to me where the preponderance of good reasons point.)

According to the respected contemporary Anselm-scholar Thomas Williams (in Stanford Encyclopedia of Philosophy), “Faith for Anselm is more a volitional state than an epistemic [knowledge] state: it is love for God and a drive to act as God wills.” So, Williams goes on to suggest, Anselm’s phrase “faith seeking understanding” is better understood as “an active love of God seeking a deeper knowledge of God.”

But there is more. As Cardinal Avery Dulles argues (in A History of Apologetics), Anselm’s own words clearly show that Anselm’s arguments concerning God are intended not merely to edify intellectually those who already believe or already have faith (though this project falls within the scope of Anselm’s intent), but also to convince via reason those persons who do not believe or do not have faith.

Anselm writes (in his treatise Monologion): “If anyone does not know, either because he has not heard or because he does not believe, that there is [a God who has various biblical characteristics], I think he could at least convince himself of most of these things by reason alone, if he is even moderately intelligent.”

Here is the philosophical-apologetical upshot. The motto “faith seeking understanding,” as understood by Anselm, is definitely a mandate to seek to understand via reason the deep theological truths already accepted by faith. However, this does not preclude the careful use of reason to help people come to faith in the first place, nor does it encourage a blind leap of faith. Rather (and regardless of whether or not Anselm’s arguments for God’s existence and God’s attributes are successful), it’s reasonable to think that the motto, when taken in the context of Anselm’s arguments, commends the careful use of reason to help unbelievers come to faith.

Yes, it should be conceded that one can take a blind leap of faith and subsequently hope to achieve understanding. However, in a world in which competing and contradictory voices call for our religious or secular allegiance—a world in which deceiving spirits (whether human or demonic) also exist—blind leaps of faith can be dangerous, if not disastrous. But this is where some good news enters into the picture: God, via our humble and Holy Spirit-directed use of good reasons (as well as via any other means God may choose), can encourage the repentant lover of truth to place his/her open-eyed faith in Him who is the Truth.

This, it seems to me, is consistent with Christian Scripture. Salvation is by faith (and faith only) in Jesus Christ, i.e., in God the Son who came to Earth as a human being to live, die for our sins, and resurrect bodily, thereby revealing God’s love for us (John 3:16). However, to the curious or questioning unbeliever, Christians are also asked to give, with gentleness and respect, an apologia—a reasoned defence—for their hope (1 Peter 3:15).

(Hendrik van der Breggen, PhD, is assistant professor of philosophy at Providence College, Otterburne, Manitoba. The views in this column do not always reflect the views of Providence.)
Posted by Hendrik van der Breggen
Email ThisBlogThis!Share to TwitterShare to FacebookShare to Pinterest
Labels: Anselm, Apologetics, Faith and Reason

Hendrik van der Breggen,
You wrote: "Anselm writes (in his treatise Monologion): “If anyone does not know, either because he has not heard or because he does not believe, that there is [a God who has various biblical characteristics], I think he could at least convince himself of most of these things by reason alone, if he is even moderately intelligent.”"

Yes, indeed a person could do that using formal logic. First he would deduce the existence of a Creator of the universe with some specific premises (found in my blog (bloganders.blogspot.com ;left menu)) and he would also continue to deduce the Creator's purpose with humankind (also written down in my blog (left menu)).

Thanks for the invitation to your blog.