On taking down monuments 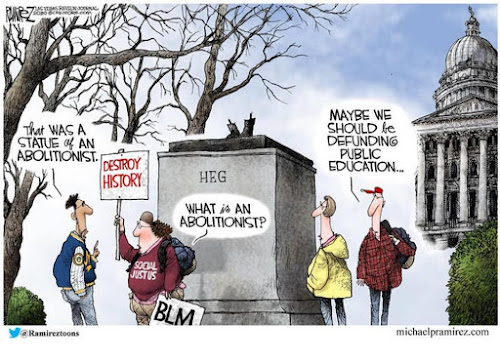 On taking down monuments

I’ve been thinking about all the monuments that have been toppled and/or vandalized recently in the U.S. by mobs because of their anger over slavery. Here are a few of my thoughts.

1. History is messy. Contrary to what seems to pass for common knowledge these days, whites aren’t the only people who owned slaves. It turns out that Native Americans owned slaves. It turns out, too, that Arabs and Asians were heavily involved in slavery. And it turns out that blacks also owned slaves and sold fellow blacks to slave buyers. Rich African chiefs even protested the abolishing of slavery—an abolition that started first in 18th century England which was for the most part … white.

For further reading and substantiation, see The Native Americans Who Owned Slaves and Africa’s Role In Slavery and 'After All, Didn't America Invent Slavery?' and 'My Nigerian great-grandfather sold slaves' and The Real History of Slavery.

2. I think some monuments should come down, especially if they celebrate some kind of moral atrocity. I’m okay with taking down monuments that celebrate Stalin, Mao, Hitler, Pol Pot, and the like. These men are responsible for the murder of well over a hundred million people. I think the monuments of some Confederate slave-holders should come down, too. I would also favour the taking down of the monument of Margaret Sanger, who founded Planned Parenthood to use abortion to help rid the world of black people.

3. About the method of taking down monuments: I think it would be wise to do this in a way that respects peaceful and law-respecting democratic processes. We should take time to investigate the actual history of the person whose monument is on the chopping block, then petition the city council or state/province (or whomever) that’s in charge, and then present our case, providing carefully thought out reasons (including pros and cons and alternatives for the monument, besides destruction, e.g., placement in a museum). Otherwise a mob mentality takes over, resulting in some “innocent” monuments (among other things) getting destroyed.

Speaking of “innocent” monuments, I think of the recent destruction of a statue of Hans Christian Heg in Wisconsin. Ironically, it was destroyed in the name of anti-racism. But Heg was an anti-slavery activist who fought and died for the Union during the U.S. Civil War so slavery could be ended. Other innocent monuments that have been recently toppled or vandalized include those of Matthias Baldwin (an abolitionist), John Greenleaf Whittier (another abolitionist), Ulysses S. Grant (a Union general and later president who helped end slavery in the U.S.), and Frederick Douglass (yet another abolitionist). (Note: Some speculate that the destruction of the Douglass statue was some sort of “retribution” for the destruction of statues like that of Heg—but this strengthens my point. Peaceful and law-respecting democratic process is to be preferred over mob mentality/rule.)

So, yes, some monuments should come down. But let’s do it wisely. Also, if there are monuments honouring black people, indigenous people, or people of colour, it’s probably also wise—and fair—to discern whether they had slaves or committed other moral atrocities.

4. The desire to take down monuments seems to be related to seeking justice for past injustices related to slavery. But when it comes to reparations of past injustices having to do with slavery, things get complicated. Slavery was practiced by all peoples, including whites, blacks, indigenous people, and people of colour (see the above linked-to articles for substantiation). So attempts to seek justice for those who were enslaved gets seriously complex. For example, it gets very difficult to seek justice for the offspring of black people who were sold by other blacks and enslaved by indigenous people who in turn bore injustices. We may have noble goals about sorting out the injustices of the past—and those goals ARE noble—but history is, as I said, messy. This means historians need to be given time to do the necessary historical work, without pressure from the mob, and citizens should become familiar with history and respect the rule of law—and thereby resist becoming a mob.