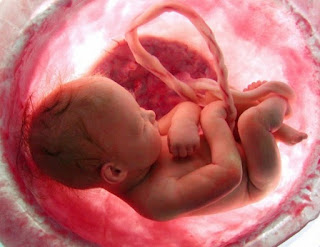 Readers might be wondering: What's with Hendrik and his many columns about abortion? Well, it's a long story.

When I first became a serious follower of Jesus (in the early 1980s), God placed a burden on my heart for the least of “the least of these”: unborn children. I had a sense I was to speak up for them (Proverbs 31.8a). I did.

I wrote lots of letters to the editor of our local newspaper (I lived in Medicine Hat, Alberta, at the time). I spoke for the unborn at our local college, radio stations, churches. These letters and various speaking engagements turned into a book: An Enquiry Concerning Human Abortion (1988).

My wife Carla and I gave the proceeds from that book to the Calgary Crisis Pregnancy Centre. We also sent a copy of the book to each Member of Parliament. In Calgary we walked in protests at a hospital and at a court house. We provided more financial support to CPCs as we were able.

We also sensed God's direction for me to go to university to study philosophy (with considerable emphasis on logic) with the aim of serving Christ's Kingdom via Christian apologetics, which includes the study of ethics. I ended up becoming a professor of philosophy, which includes teaching courses in ethics.

It depresses me. Maybe it should depress you, too.

Consider this: Canadian law does not recognize the unborn as human beings until after they’re born.

Our law is here simply out of touch with reality. And our government(s) haven’t helped a whole lot in setting the record straight.

Also, in view of recent concerns about gun control, consider this. (Note: Gun control is important and the recent mass murder in Las Vegas is horrific.)

As I mentioned, every year in Canada about 100,000 unborn children are killed by abortion. The significance of this number may be difficult to grasp, so some perspective is helpful.

Compare the abortion number to the number of homicides that occur yearly in Canada.

Here are the most recent numbers from Statistics Canada for homicides (where “homicide” includes murder, manslaughter, and infanticide, whether a gun is used or not):

That’s about 550 homicides per year versus about 100,000 unborn children destroyed per year. In other words, approximately half a percent of killings in Canada are due to homicide, and approximately 99.5 percent are due to abortion.

Yes, there are tough cases that might justify abortion. For examples, rape, incest, threats to the life or health of the mother.

But these tough cases account for a very small percentage of the total abortions. Fordham University ethicist Charles Camosy, in his book Beyond the Abortion Wars (2015, see my review here), says the tough cases amount to 2 percent of the total cases. I’ve heard others report that it might be 5 percent. Whether 2 or 5 percent, it’s a small percentage. That means an awful lot of cases are due to social problems.

I think Canada should have a law that protects unborn children and addresses the social problems that pressure women to abort.

Hendrik van der Breggen, PhD, is associate professor of philosophy at Providence University College. The views expressed this column do not always reflect the views of Providence.

Well said. I marvel at university students who feel themselves to be champions of social justice, yet turn a blind eye on these 100,000 homicides per year of the most innocent of human beings. Even more morally repugnant are those who actually promote the right and freedom to continue the slaughter .... year after year.