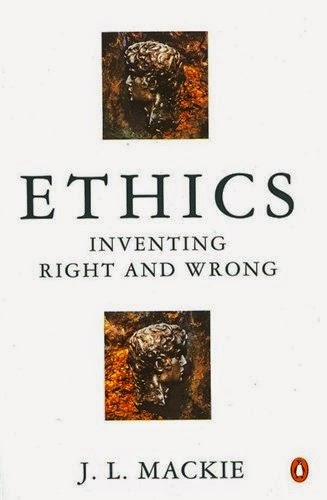 In Ethics: Inventing Right and Wrong, British atheist philosopher J. L. Mackie (1917-1981) argued famously that allegedly real moral properties are so odd (strange, mysterious, "queer") that this oddness counts against their reality. Because supposed objective (real, mind-independent) moral values are so unlike the facts of the physical world, we should doubt such values exist.

Think of a triangle that has one 90 degree angle. Now recall (from geometry class) that for any such triangle, where c is the length of the hypotenuse (the side opposite the 90 degree angle) and where a and b are the lengths of the other two sides, we know that a2 + b2 = c2 is true.

Significantly, the truth of the Pythagorean Theorem is not perceived as physical facts are perceived (e.g., by examining a particular object or group of objects and then making an inductive generalization). Rather, we examine the idea of a right triangle and discern logical implications via rational intuition—yet we do not dismiss the truth of Pythagoras's insight into reality.

I submit that the perception of moral facts is of a similar order. According to C.S. Lewis, we "just see" objective moral values. (And these are embedded in the fabric of reality as mathematical principles are.)

Surely, the value or intrinsic worth of a kitten or human person is real and is known (intuited) to be real when it's violated (though, it seems to me, a human being has much greater value than a cat). The wrongness of violating either creature is understood by the facts at hand: it is an actual being or bearer of value, flames will destroy this being or bearer of value in a very painful way, so torching/ torturing for fun is objectively wrong. We know this.

Reply: Not so. The property may be inert in the sense that it's simply there. But we who submit our will to the objective good intuit the property as a reason to act (especially if the bearer of the property is being violated).

At this juncture, Scottish philosopher David Hume (1711-1711) might charge that I am committing the mistake of deriving an "ought" from an "is" (i.e., I'm leaping to a prescriptive statement from a descriptive statement, without justification).

In response, it should be noted that we can derive an "ought" from an "is" if the thing described in the "is" or fact statement is an actual moral property or value. If it's true—i.e., a fact—that X has objective moral value (real worth), then it follows logically from that fact that X ought to be respected, i.e., not violated or destroyed.

Are moral properties so odd as to not be real, as Mackie thinks? I'm not persuaded.

Surely, in view of our deep moral intuitions concerning the truth of human worth, the good of treating animals humanely, and the good of caring for the environment, it would be odd to think that moral properties are not real.

(Hendrik van der Breggen teaches philosophy at Providence University College. The views in this column do not always reflect the views of Providence.)

The passage below is from the book What is a person? (U of Chicago Press, 2010, pp. 442-444) written by University of Notre Dame sociologist Christian Smith. Smith's work (what he calls "critical realist personalism") supports the moral realist view that human beings truly have objective moral value (a.k.a. human dignity) and we know this.

What is it that most powerfully justifies moral commitments to things such as human rights, freedom of speech, the abolition of slavery, religious liberty, universal education, due process, racial nondiscrimination, the prohibition of torture and genocide, outrage against rape, the freedom of conscience, protections against starvation, and care for refugees? Not a utilitarian calculation. Not a social contract. Not the interests of the wealthy and powerful. Not the findings of naturalistic, positivistic, empiricist social science. What justifies these moral commitments is the recognition of the natural dignity of persons, which is ontologically real, analytically irreducible, and phenomenologically apparent. In naming the real about humans in this way we continue to pull back together fact and value, the is and the ought….

In all of this, we must acknowledge that not all people or cultures or philosophies have recognized or understood the fact of human dignity or often treated ordinary people with dignity. Quite the contrary. History is replete with failures to understand, affirm, and respect human dignity. Treating humans as possessing the dignity that is rightfully theirs by virtue of the ontology of personhood may be the exception, not the rule in human history…. How can we affirm real, objective, universal human dignity in the face of such massive misrecognition and violation of it? Does this not suggest that the idea of human dignity is actually a recent cultural invention of dubious ontology and relative value? No, I think not. Nothing whatsoever in a realist theory requires that people recognize and understand something in order for it truly to exist. Bacteria and germs existed and wreaked havoc on human bodies for most of history without anyone realizing they were real—it was not until the nineteenth century that the germ theory of disease became widely known and accepted. The objectively real moral fact that slavery is a categorical evil was likewise not widely appreciated throughout most of human history, yet in the United States people's common erroneous moral understanding of slavery until the nineteenth century did not mean that slavery was not evil. It was evil—whether or not anyone realized it. Human dignity does not become real 'for us' simply because we start believing in it, any more than our heliocentric solar system became real when people started believing in it. It always was true. What needed to happen was simply for people to conform their hitherto mistaken minds to what was already true about the real. This was the case with Copernican astronomy. This is the case with human dignity. … [T]here are certain 'institutional facts' that are real social things and made so precisely by people believing in them, through 'social construction'—things like money, representative government, and sports. But human dignity is not an institutional fact. Dignity is, in Searle's terms, a 'brute fact' of ontological reality that is a characteristic and ineliminable property of emergent personhood. Dignity is rooted in the nature of things personal [i.e., human beings], not in ideas or discourse. So the fact that not all people or cultures or philosophies have recognized or understood or respected human dignity does not touch the question of its existence.

This nevertheless compels us to recognize the historically conditioned nature of humanity's awareness of its own dignity. The recognition of human dignity has not been a historical constant. Various people, cultures, and philosophies have at different times throughout history explicitly articulated the reality of personal dignity. But the clear understanding of the inalienable, universal nature of human personal dignity that emerged in the twentieth century—especially in the wake of Nazi Germany and World War II—and that is now expressed in many national constitutions, the Charter of the United Nations, and the Universal Declaration of Human Rights, was the outcome of long historical developments shaped by a variety of different religious, ethical, philosophical, and cultural traditions unfolding over time. Like most of human knowledge about people and the world, knowledge of human dignity has also been historically dynamic and progressive. People today can say more about dignity that really is true than they used to be able to say—just like we can say more now about physics, medicine, ocean life, the brain, the moral status of child labor, and the origins of the cosmos than we could centuries ago.