Is religion the cause of fighting? 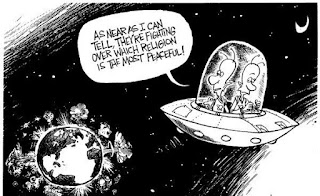 Is religion the cause of fighting?

The internet (especially Facebook) is full of cartoons and quips that deserve critical reflection.

Not long ago I saw a single-frame cartoon that depicts the planet Earth from a perspective near the moon, the Earth has nuclear bombs exploding all over it, and two aliens pass by in a space ship. One alien says to the other, "As near as I can tell, they're fighting over which religion is the most peaceful!"

Okay, there is some humour here. It’s ironic and funny (in a slightly warped way) that purportedly peaceful religious people fight over religious matters. And, definitely, we've had too much religious fighting.

But I wonder if the cartoon’s caption would portray reality more accurately if it read as follows: “As near as I can tell, they’re fighting over which atheist ideology will bring in the most peaceful society”?

Some perspective is needed here. In the secular West, Christianity is considered by many (e.g., the “New Atheists”) to be the world's bogeyman, so let’s compare the goings-on of some officially atheist societies with that of some predominately Christian ones.

As far as I can tell from history, the major horrors of Christian Europe—i.e., the Crusades and the Spanish Inquisition—amounted to the murdering of about 1.4 million people. This is terrible and wrong, to be sure.

(Note: The above numbers are from Rudolph Rummel, a Nobel Peace Prize nominated political science professor emeritus at U of Hawaii, whose life-work has focused on genocides and democides.)

Yes, Christians have done and do bad things. Nevertheless, it’s good to remember that when Christians do those bad things they go against the teachings of Jesus Christ. According to Jesus, the two greatest commandments are these: (1) love God with all your heart, mind, and strength; and (2) love your neighbour as yourself (where "neighbour" includes the rest of humanity).

Mao, Stalin and company, on the other hand, were doing what their atheistic philosophies approved.

At this juncture, a response (which I've encountered on the internet) is that religion, especially Christianity, should still be condemned. Why? Because there are (it is alleged) statistics that tell us that as many as 9 million women were killed by the witch hunts during the 15th and 17th centuries.

In reply, we should note that the 9 million figure is seriously inflated.

Sam Harris (who is no friend of religion) estimates in his 2004 book End of Faith that the number of witch killings in Europe amounted to 100,000. This number is also held by Rummel (the Nobel-nominated expert on genocides and democides, mentioned above). Also, Philip Sampson (PhD in social sciences) in his 2001 book Six Modern Myths refers to research which suggests 40,000 to 100,000.

Surely, then, we should continue to challenge the internet cartoon's message (or at least its apparent subtext) by remembering the truth: Compared to Christianity, the vast majority of genocidal-type murders have been due to officially atheist political regimes.

Why is this important? It’s important because our internet culture indoctrinates the unwary—e.g., our children—with the lie that religion—especially Christianity—is to blame for many or most of our world’s problems. However, in the case of Christianity, as I will argue in a future column, the truth is much different: Christianity has been a huge source of good.

As a teaser for my future column, think of the cross in the Red Cross, think of the "C" in YMCA, think of the fact that most of the West's first major universities were established as Christian schools, think of William Wilberforce and his work to abolish slavery in Britain because of his Christian conviction that all people are made in God's image, think of contemporary Christian relief agencies such as World Vision, The Salvation Army, Mennonite Central Committee, Samaritan's Purse, Mission To Children, Africa Mercy.

Read the internet with care. Maybe read more history, too.

Two children may get into a fight over which toy is better, but that doesn't make Toys 'R' Us responsible for that fight. In the same way fighting about religion does not imply that religion caused the fight; especially when, as you said, that fighting is condemned, at least in Christianity.