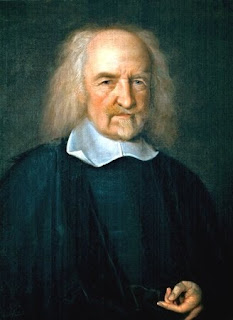 A contemporary view of ethics (popular in theory and practice if not in name) is contractarianism, a.k.a. morals by agreement. Let’s get clear on this theory of ethics, and then let’s assess it from the point of view of critical/ careful thinking.

Contractarianism can be traced back to the English philosopher Thomas Hobbes (1588-1679). Hobbes believed that there is no God, that there is no natural/intrinsic Right or Wrong, and that people are self-interested. Famously, Hobbes summed up the human predicament as follows: In a state of nature (i.e., in a situation with no God, no objective moral values, but with lots of self-interested people), humankind faces a “war of all against all” and life is “nasty, brutish, and short.”

Nevertheless, according to Hobbes, there is hope. Because people are in fact self-interested, they desire peace to escape fear and conflict and to protect the fruit of their personal industry. Moreover, because people are also intelligent, they give power to a Sovereign (i.e., a government) in exchange for peace and the arbitration of disputes. Morality, then, emerges from enlightened self-interest.

Ethics essentially consist of some agreed-to prohibitions against force and fraud, i.e., some agreed-to constraints on unbridled self-interest, which are backed up with government force (e.g., police, soldiers) and reinforced by culture (e.g., school, church).

Contemporary philosopher Antony Flew: “A general explanation of morality and [self-]interest might be stated thus: all our benefits come from the existence of a stable society; the observance of certain moral rules is a necessary condition of such a society; hence we have an interest in maintaining moral order.”

Therefore, according to contractarianism, ethics are ultimately and merely a social contract (implicitly or explicitly held) that is prudent for everyone to accept.

What should we think about Contractarian ethics? Is it reasonable to hold? It seems to me that there are pros and cons, but the cons outweigh the pros.

Here are some pros:

Pro 1. Contractarianism appeals to our sense that people should be free to decide which moral views they think is best. Personal autonomy, after all, is important.

Pro 2. Contractarianism appeals to our sense that we should have a minimal morality to allow us to live together via agreement in the midst of (apparently) diverse moral views. Prudence and an element of practicality in morality are important, surely.

Pro 3. Contractarianism seems to harness and direct people’s self-centeredness in a positive other-oriented direction. This is especially appealing in a democratic free-enterprise economic system that relies on agreements between employees and employers, buyers and sellers, governed and government. The idea is that I’ll do what you want, if you do what I want. Win-win!

So far, so good. But there are cons, too, which shouldn’t be ignored:

Con 1. Yes, contractarianism is attractive; however, its attraction seems to arise from confusing a political view for an ethical view. Keeping agreements is important for a society to function, to be sure, but on contractarianism the agreements become mistaken for morality, the latter of which is more basic than the former. In turns out that on contractarianism the social contract between government and governed, or between self-interested individuals or groups, is substituted for the deep understandings of right and wrong by which we can and should judge the social contract in the first place.

Think of it this way: We are willing to agree to prohibit act X because we think X is wrong (so far so good); but then, on contractarian moral philosophy, act X ends up being wrong merely because we agree that X is wrong. But this is to engage in philosophical sleight of hand—agreements are substituted for morals.

Con 2. Following closely on the heels of the previous point, contractarianism locates the wrongness of an act merely in the breaking of an agreement. But this means that on the contractarian view, obvious evils such as murder, rape, torture, and child molestation are not wrong in themselves, they are wrong only insofar as a contract is broken.

What is worse, it would actually be okay to murder, rape, torture, etc. if you didn’t mind paying the price for breaking the contract if you got caught. By “buying” your way out of the contract (by paying a fine or going to jail) you in effect live up to your end of the contract, and so your murder/ rape/ torture/ molestation isn’t actually wrong in itself. There is no real wrong; the problem is merely your lack of enlightened self-interest—you simply weren’t smart enough not to get caught!

Con 3. Because, on contractarianism, the wrongness of an act is located in the breaking of an agreement, it turns out that those who are outside of the circle of agreement (outside of the “club”) are not morally relevant. But this means that dastardly things can be done to those with whom you do not enter into agreements. It would not be wrong, then, to murder/ rape/ torture/ molest those who are not part of your society (club). In other words, ethics turns out to be essentially relative to one’s group. Enter: the factual, logical, and moral problems of moral relativism (as presented in my previous two columns: here and here).

In sum, contractarianism is deeply problematic because it fails to account for two facts: (1) that human beings have objective moral value (intrinsic worth) and so, at the very least, should not be violated; and (2) we know this.

Agreements are important, but they are not the whole story about ethics.